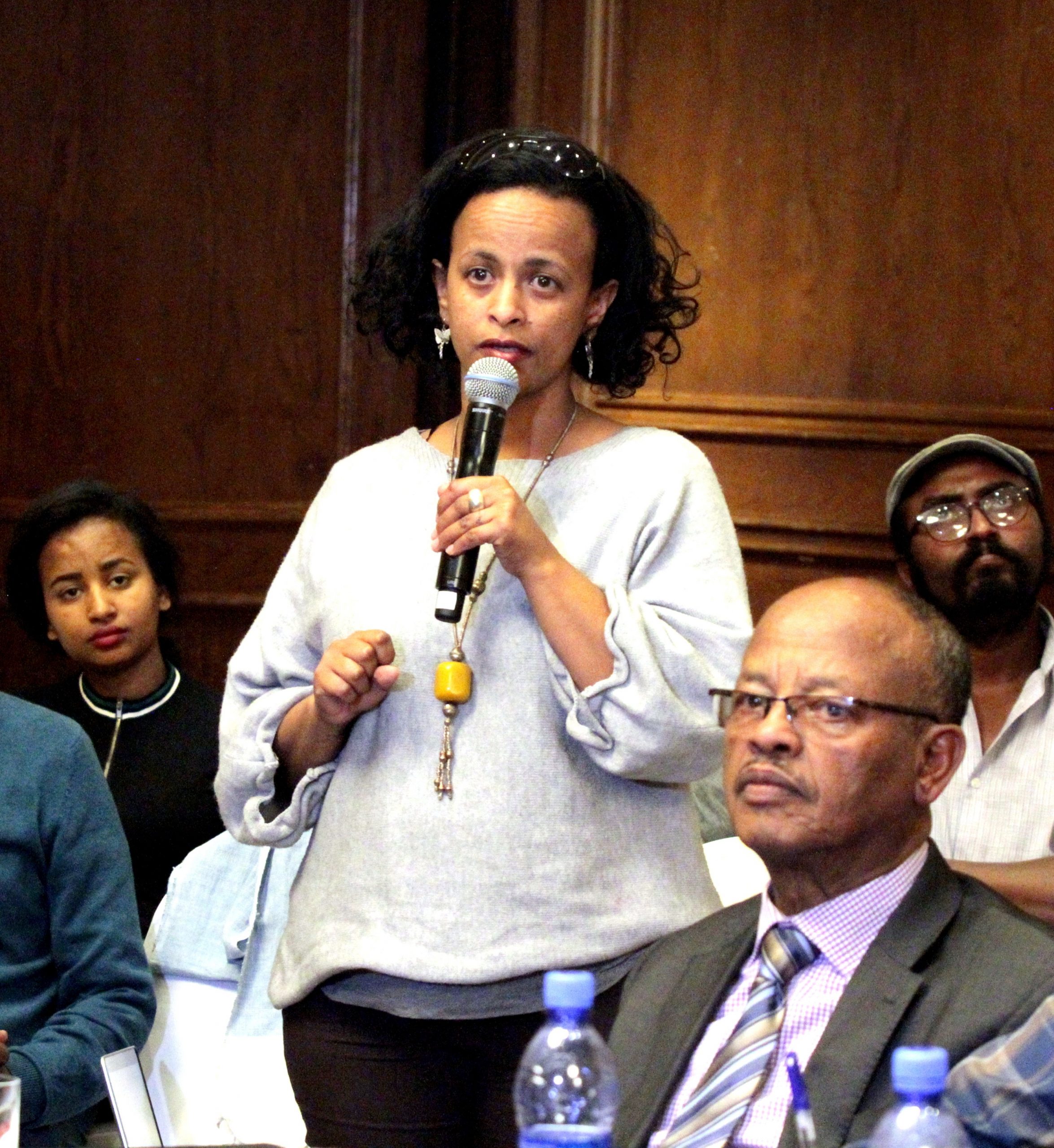 The erasing of Ethiopian feminists with a different ideological perspective is a hypocritical exclusionary maneuver.

A few days ago, a friend and I were discussing, or rather, making fun of, trends in academic diction. And no sooner had we quipped about the epistemology of the Anthropocene, then an article entitled ‘The Epistemological Violence of Awol Allo’ showed up on my Twitter feed.

The article was written by Sehin Teferra, who heads ’Setaweet’ a feminist organization which once described itself as the “First Feminist Movement in Ethiopia”. This articulated self-image became a bone of contention between me and Sehin, sparking a series of debates over the political history of feminism in Ethiopia. It is as a result of these debates that Setaweet dropped the “first feminist movement in Ethiopia” trope (if not attitude) and started ‘researching’ the student movement—all welcome steps.

Steeped, as I am, in the history of the Ethiopian Student Movement, of the various publications around gender equality that they produced, of the near mythological standing of Martha who hijacked a plane, of the TPLF army of which women were a significant part, of Tadelech whose last child with Berhane Meskel was born in prison and who would become the first Minister of Women’s Affairs in the Federal Democratic Republic of Ethiopia, I couldn’t help but wonder why Sehin felt the need to discount, let alone erase these women’s histories and their conceptualizations of gender equality?

The ‘epistemological violence’ of Awol Allo
By Sehin Teferra

Is it a dislike of their quest for gender empowerment or a dislike of the ideologies and thinking that underlined their quest for gender equality? Is feminism only feminist when it’s liberal? Or perhaps feminism is only feminism when it comfortably aligns with a particular vision of Ethiopia’s nation building process? Is this what she means when she writes: “Where the knowledge is formed by empirical data that is nevertheless open to interpretation that could go in several directions” Is the direction it could go towards complete omission of empirical data?

I couldn’t help but understand “The First Feminist Movement in Ethiopia” as women rendering women invisible. The full force of their erasure, as anything but a virulent form of violence on women, and, on epistemology, on how we know what we know. Does Marxism cease to exist as a body of knowledge, as a formidable epistemological tradition simply because someone standing at some pulpit renamed Marx,  Mark? Is class analysis necessarily Marxist? My reading of Adam Smith says different.

A recently published book by promising academic Elleni Zeleke argues that amongst the significance of the Ethiopian Student Movement was its introduction of social science as a way to understand and examine our society, an epistemological development that’s permanently changed our historiography and introduced, in Sehin’s words “healthy competition between dominant narratives”.

I had the pleasure once of attending a conference on Wallelign’s consequential paper on the nationalities question organized by the Institute of Strategic Affairs at which Sehin pointed out that women make up more than 50 percent of the electorate and could become a demographic to reckon with “if only”, she lamented, “these women could think as citizens”.  The condescension seemed, to me, as fundamentally anti-woman as seeking to erase the histories of women, of feminists, whose politics doesn’t fully align with hers. For Sehin, women should politically be women, but be ‘citizens’ in terms of the politicization of other identity markers.

What about citizenship requires that I shun any given identity? Can one be a hyphenated American and still be a citizen of the U.S., as so many Ethiopian-Americans claim to be? Can they remain “citizens” if they include within their politics a quest for an end to police violence against black Americans, a group to which they also belong?

And yet more questions: what, if any, obstacles does my conceptualization of Ethiopia as a multinational federation create for my feminism or my ability to be a responsible citizen? Does citizenship or feminism require a diminishing of pride in my culture or language? And, if so, why? What does it mean to ‘think like a citizen’ in modern-day Ethiopia? Does it require that I think about the country’s relationship to global capital and its impacts on sovereignty? Does it require that I critically examine how well women have fared in places as disparate as Nigeria, Poland, and Brazil under the market fundamentalism espoused by wannabe ‘Chicago Boys’?

Is it to pay my taxes and make informed decisions at the polling booth? These are all questions I wished to ask, unfortunately, the moderator, another ‘citizen feminist’ with a fondness for following trends in academic diction, lectured the audience on the lack of female participation before denying me, one of the very few women who wished to participate, the opportunity to do so. Women rendering women invisible as feminism.

To infer that a woman’s political activity should be limited to a gender question that is somehow sanitized from her political orientation, from the epistemological grounding from which she approaches the question, isn’t simply an improbable proposition, but serves to undermine a women’s agency as a political subject. In this context, it also serves to present Sehin, and her work with the “first feminist movement” as ‘neutral’ and ‘objective’, a fight against oppression that is free of political action and political perspective. Sehin knows how this aids her influence as a political pundit. But there is a politics, an ideology, attached to the connotations that ‘citizen’ has now taken on in Ethiopian political discourse.

Viral healing for our chronic political disease?
By Zola Moges

If, as she claims, “There is no credible threat to federalism in Ethiopia. Awol [no desire to align my position with his or defend his positions], and others, have fashioned a bogeyman of ‘Ethiopianness’ or Ethiopiawinet” then how could there possibly be a distinction between thinking as a citizen in a multinational state, and recognition of the multitude of nationalities that make up that state? Can pan-Ethiopianism or citizenship mean anything else in this context, if, again as Sehin claims,“We have moved far beyond the times where Ethiopia was a cultural hegemony with one state religion, and we are all the richer for a multiethnic, multicultural Ethiopia”?

If this is true, then wouldn’t Ethiopianism, Ethiopiawinet, citizenship and feminism now all comfortably belong within this re-imagined Ethiopia? Wouldn’t to think as a citizen be, by definition, to think in terms of a federal Ethiopia unified through respect and political acknowledgment for the diversity of its self-governing constituents? Can such an Ethiopia afford civil society activists that unabashedly make generalized statements such as “Would he set a moderate middle ground for the Qaarrees and Qeerroos who might listen to his words?…ethnic labels are lethal…it is now Oromos who kill and terrorize Others”?

The choice of associating “Qaarrees” and “Qeerroos”, a self-proclaimed militant group, with moderation, and “Oromos” with killing and terrorizing exposes, however inadvertently, the writer’s biases, her ideology, the body of knowledge that informs her thinking; her lack of ‘neutrality’ or ‘objectivity’. It is the ultimate betrayal of the “kindly Oromo landlady” who saved Sehin’s cousin by “vouching” for him in “Afaan Oromo”. Can we view, to borrow from Elleni, civil society as neutral arbitrators of conflict? As depoliticized, de-ethnicized citizen-feminists who occupy an imagined moral high ground from whose perches they preach to us women who have failed to understand that we could be a demographic to reckon with, if only we could think as citizens? Who said we aren’t ?