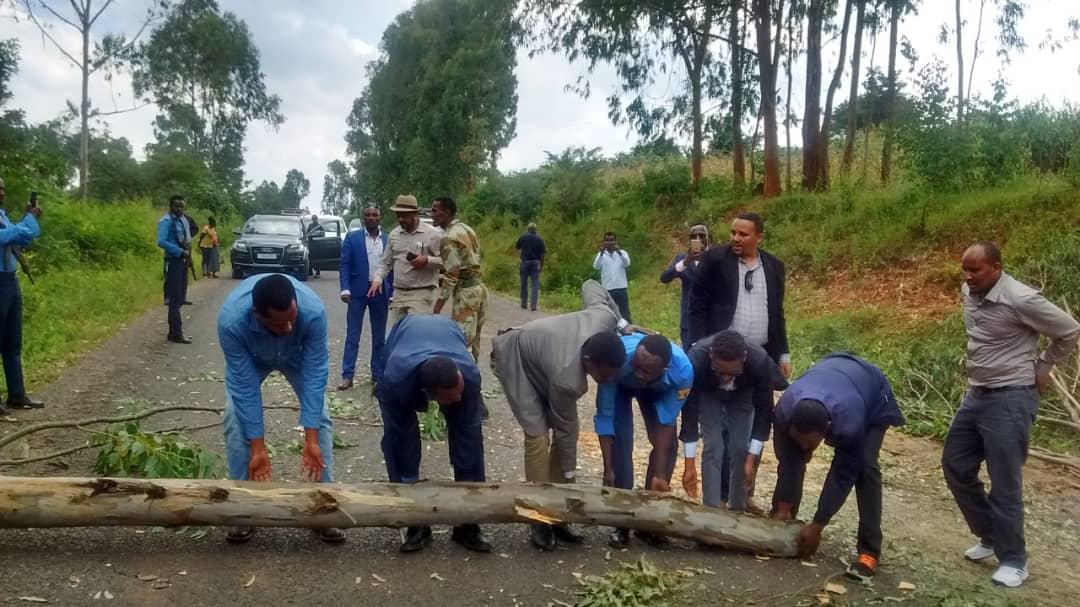 On 17 December, the Federal High Court rejected a request for a temporary court to be established near Kality prison by Jawar Mohammed, Bekele Gerba, and two co-defendants who claimed they may be attacked on the way to proceedings in Addis Ababa.

Oromo Federalist Congress leaders Jawar and Bekele, as well as activists Hamza Adane and Shemsedine Taha—also known as defendants 1, 2, 3, and 13—are on trial with 20 others for crimes including foreign collusion, murder of a police officer, and intent to topple the government by force. They were arrested during unrest the day after Hachalu Hundessa’s 30 June assassination. More senior opposition leaders as well as journalists and political activists are also facing prosecution in other ongoing cases.

The absentee defendants’ 27 November written request to the court said they feared being targeted on the way to Lideta criminal bench due to their political profiles and the media campaign against them. It said any attack on them would create further chaos.

Citing the Federal High Court Establishment Proclamation 322/2003, the ruling stated there were insufficient reasons to comply with the request. It said forming a temporary court could be reassessed if “sufficient reason” arises.

The ruling instructed defendants 1, 2, 3, and 13 to attend for the next session, and authorized the prison to compel them to do so. Their attorneys protested against the permission to use force, stating that protection against harm is a human right.

Following the temporary court ruling, Deputy Attorney General Fekadu Tsega told VOA Amharic that, “any defendant is transported with security as per the prison’s working procedure and if there is a safety concern the government will have no difficulties to employ extra security measures,” adding that nothing has happened to defendants in the past.

On 27 November, the Attorney General’s office submitted a response to the defense’s complaint that Attorney General Gedion Timothewos Hessebon had compromised their right to fair trial by assuming their guilt in a 24 September statement. Though the defendants argued he should appear in court, the prosecution pointed out that “the court did not order the personal appearance of the Attorney General.”

In its written response, the Federal Attorney General asked the court to dismiss the complaint. The response stated there had been no violation of the principles of presumption of innocence or judicial independence, claiming instead that the statement merely presented information to the public.

On 17 December, the court received an Amharic version of the original statement, which was made in English at a press conference, and said it will rule on the matter.

In the previous hearing, the defense had submitted six arguments regarding the charges.

The first is that the Federal High Court has no jurisdiction to oversee the matter since the charge alleges that the crimes have been committed in Oromia and Addis Ababa. Therefore, the region of Oromia has a special interest, and so the charge should have been filed at the Oromia Supreme Court.

Ethiopian Court asks Attorney General to explain comment after Jawar and Bekele accuse him of presuming their guilt
Politicians and their lawyers complain that the government’s top legal officer undermined their right to a fair trial.

Second, the issue is not one that can be reviewed by the judiciary or is not a justiciable matter because the charges are against the defendants’ participation in politics and their involvement in political struggles.

Fourth, the charge violates the principle of equality before the law, as provided under the constitution. No criminal charge has ever been instituted before against anybody for using the term “nefetenga”.

The fifth point states that the description of the crime under the charge does not line up with the elements of criminal law provisions being invoked.

The final point states that charges do not detail the victims, properties involved, and/or how the crime was committed.

The prosecution presented the court with a written response to the defense’s arguments, countering all six points raised.

On 17 December, the court initially adjourned until 2 February, but defendant Dejene Tafa protested. He said: “The delay aims to exclude the defendants from the upcoming election and it also deprives our right to speedy justice”. The judges responded by bringing the next hearing forward to 12 January.

Main photo: Jawar and Bekele on the road near Nejo, Oromia; 14 November 2018.