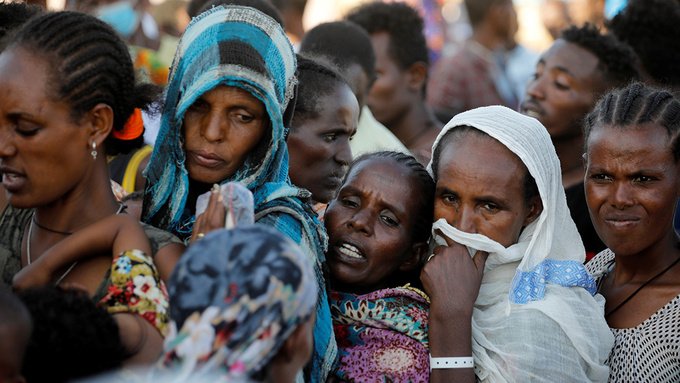 As the UN Office for the Coordination of Humanitarian Affairs (OCHA) affirmed on 4 February, the humanitarian situation in Tigray is alarmingly deteriorating by the day due to continuous fighting, gross human rights abuses, state bureaucracy, and lack of access to basic necessities as such food, water, shelter, and medicine.

It is now abundantly clear that unless the international community delivers immediate, unhindered, and impartial humanitarian assistance to millions of Tigrayans, the death of hundreds of thousands of civilians appears to be inevitable due to human-made famine.

The world is fully aware that a substantial number of people in Tigray have been cut off from food, water, electricity, medicine, banks, and communication services for over 100 days as a result of the war.

UN agencies have reiterated estimates that 4.5 million Tigrayans require emergency and life-saving urgent assistance and over 2.5 million children are malnourished. People have already begun to die, including entire families, in cities and towns such as Adwa and Axum. Furthermore, over 2 million and 60,000 people have been displaced internally and externally, respectively.

The Ethiopian federal government has been claiming that it is reaching out to millions to deliver relief in the region, as the Peace Ministry announced on 7 February. Furthermore, they claim that things are not out of control, the stores in the region have food stocks, and that other necessities and more aid is coming via Djibouti’s port.

Some have accused the Ethiopian government of using starvation as a weapon. This is backed by the fact that the Eritrean and Amhara forces have been looting and vandalizing foodstuff, medicine, livelihoods, and businesses in urban and rural areas, in addition to the shocking atrocities they have been perpetrating against civilians.

The Ethiopian government, however, has been denying such accusations. Its officials and supporters have claimed that the issue of the humanitarian crisis in Tigray is vastly exaggerated and politicized by what they call the remnants of the TPLF ‘junta’ and their backers in the West.

Both the Ethiopian and Eritrean governments continued their policy of denial of the deliberate and total economic and livelihood destruction they have inflicted on Tigray and its population. They also continued denying the involvement of Eritrea in the conflict despite the fact that army commanders and regional officials of Ethiopia, foreign governments, and Tigray’s public are confirming their presence.

Customary humanitarian law states that: “The parties to the conflict must allow and facilitate rapid and unimpeded passage of humanitarian relief for civilians in need, which is impartial in character and conducted without any adverse distinction, subject to their right of control.”

While the law recognizes that consent of warring parties, including concerned governments, is required for delivering aid, such consent shall not be refused arbitrarily. In particular, “if it is established that a civilian population is threatened with starvation and a humanitarian organization which provides relief on an impartial and non-discriminatory basis is able to remedy the situation, a party is obliged to give consent.”

Yet, as the UN and other humanitarian actors have made it clear the Ethiopian regime is not cooperative and is hindering their efforts through excessive bureaucracy and reluctance to allow them to help people without state intervention and supervision. Furthermore, many of the efforts made so far are limited to some cities under the control of federal forces, and, as a result, millions of Tigrayans living or sheltering in rural Tigray are not getting access to essential goods.

After protests, persistent pressure from all directions, including the United Nations, Europe, humanitarian organizations, the US, the EU, and international media, the Ethiopian government is now opening up the space for the UN and other humanitarian agencies. OCHA has expressed some cautious optimism in this regard.

However, the international community must undertake an impartial aid delivery without a delay to prevent human catastrophe for the following reasons:

First, the Ethiopian government is not, and cannot be, a trusted and responsible partner on this matter. The government has been persistently denying access and impeding the humanitarian response. Jan Egeland, the head of the Norwegian Refugee Council, said, “in all my years as an aid worker, I have rarely seen a humanitarian response so impeded and unable to deliver in response for so long, to so many with such pressing needs.”

Therefore, relying on the Ethiopian government as the main agent of the distribution of aid across Tigray would constitute a serious mistake and complicity in starving the population.

Second, even if we can somehow find the Ethiopian government to be reliable, it does not have control over parts of Tigray that are effectively controlled by the ruthless and inhumane Eritrean forces.  There are also parts controlled by Amhara regional forces. These two forces do not know respect for humanity or humanitarian norms. In fact, they are engaged in house-to-house looting of foodstuff, cooking items, and medicine; they are also engaged in burning and vandalizing anything that they think would sustain the civilian population.

Therefore, signing an agreement with Abiy’s administration to manage aid delivery is not going to help unless Eritrea’s regime is restrained and fully understands that using starvation as a weapon and hindering humanitarian assistance are serious war crimes expressly forbidden by the Geneva Conventions 1949 and their supplementary protocols of 1977.

For this to happen, however, the Ethiopian regime must officially admit that Eritrean forces control substantial portions of Tigray, and at least partially admit the atrocities committed by them, which seems highly unlikely.

Finally, at the time of writing this note and appeal, only some Tigrayans who reside in main cities have got very limited access to basic aid in the region. Furthermore, I have received reports from people in Mekele, Axum, and Adwa indicating that party officials are discriminately managing aid distribution along party and family lines. Those in rural areas who are affected the most are not getting access to food and other basic need as a result of the fighting and lack of transparency and impartiality in the aid distribution process.

To overcome these and other deliberate or inadvertent impediments, it is crucial that the UN, like-minded actors, and the international community make sure that:

Whether these and other necessary measures would be taken to avert the unfolding human tragedy without a swift, binding and decisive United Nations Security Council resolution on the matter remains.

Main photo: Tigrayan refugees who fled the the war standing in line for supplies at the Um Rakuba camp in Sudan; Baz Ratner for Reuters.