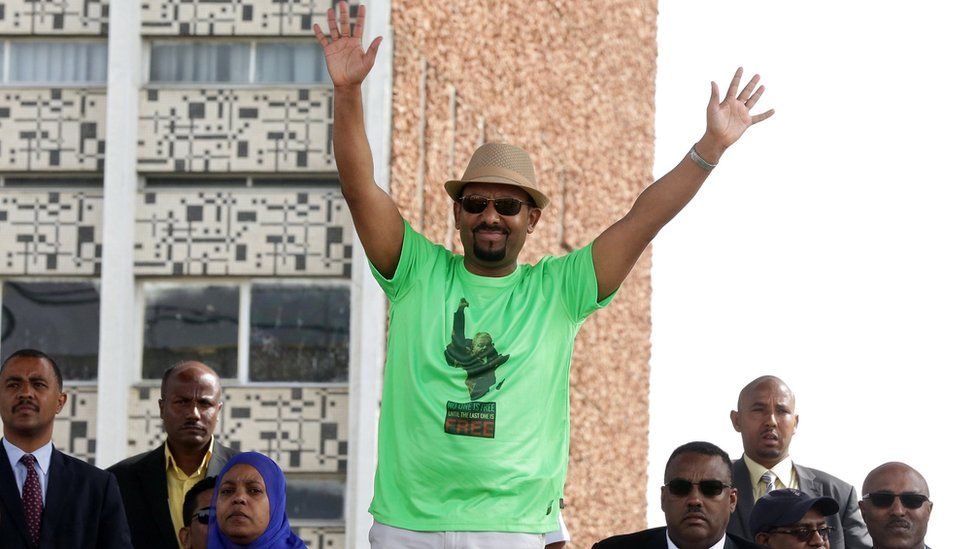 Once hailed as a great reformer, a unifying voice for democracy, it is clear that Prime Minister Abiy Ahmed’s push for a strong central state is causing Ethiopia to unravel.

Despite coming to power in 2018, following widespread youth protests and general public discontent, it now increasingly looks like Abiy’s assurances to implement democratic reforms were just a mirage of false promises masking his push for domination from Addis.

The country is enmeshed in a devastating civil war in Tigray, ethnic tensions are rising in the Amhara, Tigray, Oromia, and Benishangul-Gumuz regions, with armed insurgencies in the latter two regions, and an upsurge in civilian massacres in Tigray at the hands of the Ethiopian federal, Amhara regional, and Eritrean national forces. These destructive elements have left millions displaced, at risk of starvation, and embroiled in violent turmoil.

Not only does the situation highlight the weakness of the reform process, but it also demonstrates that Abiy’s mismanagement of a delicate transition has left the country at risk of a dangerous fragmentation along ethnic lines.

Given the volatility of the Horn of Africa, the fallout from Abiy’s failed leadership is a major threat to regional stability.

Ethiopia has a complex history that involves a long list of unitary heads of state who did not recognize the unique identities of its more than 80 ethnic groups.

A recent example is the Derg military dictatorship that reigned between 1974 and 1991 under Mengistu Hailemariam after overthrowing the imperial system. Mengistu’s regime not only consolidated all state power at the top, but also disregarded the needs and desires of local communities in an attempt to create a monolithic political system.

However, the assimilationist nationalism—’Ethiopia First’ was its slogan—that defined the Derg did not fare well, as it led to several ethno-national insurgencies and protracted civil war that would eventually overthrow the regime and its unitary system.

The premise of this new system was that by empowering ethnic groups through regional autonomy and instilling a constitutional right for “nations, nationalities, and peoples” to secede, multinational federalism would lead to genuine and greater national unity via voluntary collaboration.

However, Ethiopia’s federalist system started to wobble once long-simmering public discontent—initially stemming from land grabs around Addis Ababa and later broadened to include bad governance, political restrictions, and human rights abuses—led to the resignation of Prime Minister Hailemariam Desalegn in early 2018.

Despite being appointed to govern until the 2020 elections, his replacement, Prime Minister Abiy Ahmed, has sought to recentralize all state powers within the federal government thereby effectively undoing the multinational federation established in 1995. The so-called reform process involved the systematic sidelining of the TPLF from federal power and the demonization of its leaders, and so, by proxy, its people.

Despite claims of greater political pluralism and increased recognition of the cultural and linguistic rights of all Ethiopians, Abiy’s moves toward a  strong central state and brazen consolidation of power tell a different story.

As many marginalized communities view it, this move may lead them back to the oppressive and authoritarian leadership reminiscent of Mengistu’s authoritarian centralized state. Notwithstanding these misgivings, Abiy solidified his desire for such a state when he dissolved the multi-ethnic EPRDF and formed the Prosperity Party (PP), a pan-Ethiopian national party.

Is Ethiopia coming together or falling apart?
By Ahmed Hassen

It could be argued that the change in Ethiopia’s political makeup is unconstitutional, as the undermining of the federal system, in which the major ethnic groups administer their own regions, denies the unconditional right of every nation, nationality, and people in Ethiopia to self-determination, including the right to secession. This change also comes at a time when scores of Ethiopia’s ethnic groups are calling for autonomy and the protection of cultural rights.

Ethiopia’s history with assimilationist nation-building during Haile Selassie’s reign demonstrates the cultural erasure that is likely to result from a strong centralized state and the political collapse that follows.

In fact, both Sudan and Somalia are also examples of unitary states that failed in their attempts to unify their people through assimilationist policies. These examples illustrate the tendencies of a centralized state to privilege certain groups and trigger fears that the ills that plagued Ethiopia’s previous assimilationist nation-building efforts may resurface.

Furthermore, by redistributing power and moving the country away from multinational federalism, rather than working alongside ethno-nationalist groups to assure all needs are met in an inclusive reform process, Abiy has barred any avenues to rescue the situation. As a result, he has forced ethnic groups and regional states to once again defend their constitutionally mandated rights by, in some cases, taking up armed resistance, as in Tigray, Oromia, and in Benishangul-Gumuz by Gumuz groups.

Ultimately, it was Abiy’s dilution of regional autonomy that laid the foundation for the civil war in Tigray. Given their commitment to multinational federalism—notwithstanding the shortcomings of the former federal leadership in respecting the self-determination rights of regional states—the TPLF refused to join the Prosperity Party on grounds that the merger was “illegal”.

This rejection made the TPLF the most vocal opponent to Abiy’s efforts to re-centralize all state powers. Tensions between Abiy’s administration and the TPLF-run regional government continued to escalate when Tigray moved forward with elections for its State Council despite the federal authorities’ postponement until up to a year after the pandemic subsided.

In refusing to adhere to Abiy’s deferral of federal elections, Tigray’s opposition exposed the postponement for what it was: an unconstitutional delay designed to prolong Abiy’s rule. As a result of the election, tensions between the two administrations continued to rise, with each rejecting the legitimacy of the other, and Abiy’s government implementing harsh measures (including blocking COVID-19 and locust assistance and diverting the regional budget) as a means to cripple Tigray.

Abiy’s inability to garner Tigray’s support in his efforts to consolidate power led to an internationalized civil war between the federal defense forces, with the cooperation of Eritrea’s army and Amhara forces, and, on the other side, Tigray’s regional government.

While Abiy cited the 3 November assault on Northern Command by Tigray regional forces as his rationale for deploying troops, there is strong evidence that Abiy’s administration was preparing to attack Tigray. These include reciprocal visits made by Abiy and Eritrean President Isaias Afewerki to each country’s military bases/training sites; attempts made by Abiy to reshuffle the military leadership of Northern Command; statements by Amhara officials on pre-war mobilization; and talks between Abiy and Sudanese officials to secure the Ethiopia-Sudan border as a means of blockading Tigray.

While Abiy presented the conflict as a quick law and order operation targeting only a few top TPLF leaders, the large-scale offensive, clearly designed to inflict massive damage on Tigray, has now turned into a gruesome, prolonged conflict that has sparked a humanitarian crisis.

Despite the deliberate communications blackout and limited access to Tigray, reports have emerged regarding atrocities committed by Ethiopian and Eritrean forces. Reports of wide-scale sexual and gender-based violence, weaponized starvation, civilian massacres, and indiscriminate violence are consistently being brought forth. Displacement is also hitting record numbers, with an estimated 2.2 million internally displaced and more than 60,000 people fleeing over the border to Sudan.

The worst may be yet to come. With talks of looming famine and no end in sight to ongoing war crimes, Tigray’s survival and the cohesion of the country are at risk.

Abiy’s centralization efforts have also not fared well in his own region of Oromia, where many believe a strong central government will diminish the rights of an already marginalized group. While tensions have been festering in Oromia since Abiy’s transition away from multinational federalism, the region has experienced a sustained period of instability since the death of Hachalu Hundessa, a prominent Oromo activist and musician, in June.

Since then, unrest quickly spread across Oromia and to Addis Abeba, turning deadly with ethnic attacks and property destruction. Abiy attempted to mitigate the rise in violence by arresting political opponents his attorney general branded extreme ethnonationalists working to destabilize the country. However, the authorities’ attempt to thwart dissent by arresting thousands of opposition activists, politicians, and protesters has only furthered divisions.

The Oromo Liberation Army (OLA) is now Abiy’s most staunch critic and strongest opponent in the region. Once the armed wing of the Oromo Liberation Front (OLF), a political party established by Oromo nationalists to secure the self-determination rights of the Oromo people, the OLA broke away after its demands went unmet in a peace agreement forged between the Ethiopian government and the OLF in 2018. The group is currently involved in an armed insurgency, declaring its intention to fight for the self-determination rights of the Oromo people.

The OLA claims that the Ethiopian government is involved in the extrajudicial killings, arrests, violence, and detentions of OLA supporting Oromo civilians. However, Abiy’s administration has labeled the OLA a terrorist group responsible for the ethnic-based killings in the Oromo and Amhara regions. Regardless of each group’s demonization of the other, it is clear that Abiy’s political vision is furthering instability and fragmentation.

Once Abiy’s primary source of support, many people in the Amhara region have become fed up with the leader’s inability to safeguard against ethnic attacks. Ongoing clashes between members of the Amhara and Oromo ethnic groups have led to several civilian deaths. There are also reports of attacks against Amhara civilians and politicians in the South Wollo and North Shewa zones of the Amhara region.

The region has also been a hotbed of ethnic violence against other groups, as there are reports of targeted attacks against non-Amharas. These events have led to an unprecedented number of internal displacements, as many Ethiopians no longer feel safe outside of their own region. Taking into account the massive wave of violence and the instability in the region, Abiy instituted a state of emergency in the southern part of the region.

With many blaming OLA for the massacres, several ethnic Amharas condemn Abiy for his inability to protect Amhara civilians. On 20 April, hundreds of thousands across the Amhara region came out to protest against the targeted ethnic attack of Amharas. Protesters not only denounced the attacks but also called for the removal of Abiy’s Prosperity Party. The unrest is likely to threaten both peace and stability in the region, and potentially delegitimize the federal government, as Abiy’s newly formed Prosperity Party risks fragmentation if he loses a key ally in his ruling coalition.

As of late, there seems to be no end in sight to the ongoing war, ethnic strife, or armed insurgency. The Tigray Defense Forces vow to continue fighting until all invading forces leave Tigray and the legitimate government of Tigray is restored to power. Insurgency militias elsewhere remain steadfast in their fight against state authorities, and reports of ethnic-based persecution continue to rise. By refusing to address the concerns of groups loyal to the federal system, Abiy will continue to destabilize the country.

The dire situation has left the country at a crossroads, with a centralized state at one end and disintegration at the other. Given Ethiopia’s geopolitical significance, the negative impact of its disintegration would be massive for the entire Horn of Africa and further afield.

Thus, Abiy must decide whether his vision as supreme ruler is worth the potential collapse of Ethiopia and severe regional instability.

Main photo: PM Abiy Ahmed at a large rally supporting him and the reforms he made after taking power; Addis Abeba; 23 June 2018; Reuters

Feven (Ph.D.) is a higher education researcher and administrator based in the U.S. She is also a member of the Global Society of Tigrean Scholars, an organization dedicated to uplift and develop the Tigray region.