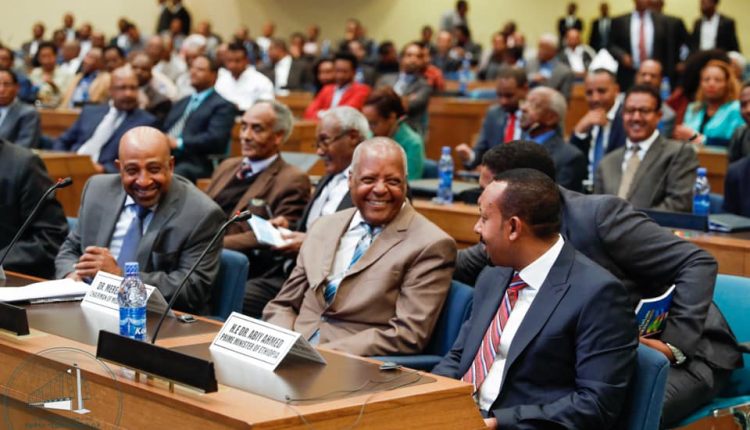 Ethiopia’s political landscape is defined by extreme diversity, and that has led to a political culture with many contrasting viewpoints.

Disagreements abound on important symbolic issues, including the country’s flag, its shared heroes, and whether Ethiopians are ‘one people’ or collections of many different ‘peoples.’ Disagreements over identity in Ethiopia have often led to conflict and even outright war.

The country must collectively abandon the use of force as a means of settling political disputes and commit to inclusive and constructive dialogues to address competing visions for the country. Turning a blind eye will lead to further chaos with the potential to spread beyond Ethiopia’s borders to the rest of the Horn of Africa—a nightmare scenario to be avoided at all costs.

In 2005, the EPRDF was determined to win federal elections in a fair manner. Despite massive voter turnout, polling results were sobering for the incumbents. The opposition party ‘Coalition for Unity and Democracy’ (CUD) successfully capitalized the support it had among Amharas and urban elites and won many major towns in Oromia, Amhara, SNNPR, and the capital Addis Ababa. In response, the EPRDF tampered with votes in rural communities, which they claimed was the deciding factor that secured their victory.

Both parties failed to seize opportunities created by the 2005 election: the EPRDF could not present a strong vision for Ethiopia’s democratic transition, while the CUD failed to become powerful enough to invigorate the transition on its own terms.

Despite many other opposition groups and members of the international community describing the 2021 elections as a coronation for the incumbent regime, many former CUD members who now represent various Amhara and urban elites portray the election as largely “free and fair.”

As Ethiopia is going through another election marred with claims of illegitimacy, have we learned from past mistakes?

Oromo identity and political expression have grown stronger since the formation of Ethiopia’s current system of ethnic federalism. In recent years, Oromo youth have grown increasingly engaged with the Oromo language and culture. This ‘reawakening’ has been articulated through a form of identity politics called Oromumma, which ushered in the influential youth-led Oromo nationalist political movement known as the Qeerroo.

Powerful intra-Oromo groups, including the Shewa Oromo, were central organizers in the successful Oromo protest movement that lead to the most recent regime change. Cognizant of the Shewa Oromo’s influence primarily due to their proximity to the capital and their historical contributions to Ethiopia’s state-building process, Prime Minister Abiy appointed the first-ever Shewa Oromo, Shimelis Abdissa, as the President of Oromia. Abiy showered more resources into the area to co-opt the youth and discourage them from joining other opposition groups.

The newfound assertiveness of Oromo youth unsettled the TPLF. Their leadership relied on a divide-and-conquer strategy that pitted the two dominant ethnic groups, the Oromos and the Amharas, against one another. Imprisonment, banishment, and extrajudicial killing were used to stifle the new Oromo movement. In the face of the newly unified Oromo movement, these tactics no longer seemed effective.

The death of the late Prime Minister Meles Zenawi was a watershed moment for TPLF rule. Upon his death, the TPLF lost their key ideologue, and with that, their figurehead position within the ruling coalition. Hailemariam Desalegn, the successor of Meles, failed to suppress the deadly anti-government protests, which was later attributed to him being a “weak and undistinguished leader.”

Survival for the EPRDF coalition meant accepting a new reality: genuine equality for all coalition members. Up until then, TPLF held onto critical portfolios such as the military, intelligence, and financial sectors. This uneven distribution of power fueled resentment. Members of the Oromia and Amhara parties began heeding demands from their disgruntled constituents for the pardoning and release of political prisoners as civil disobedience intensified throughout the country from 2016.

The country’s continued instability forced Prime Minister Hailemariam Desalegn to resign, paving the way for Abiy. Several factors supported Abiy’s rise to Ethiopia’s highest office. Firstly, within the EPRDF, a newfound unity among Oromos formed a strong voting base. Secondly, other ethnic groups were persuaded to support the Oromo leadership in the wake of the successful Oromo-led protests. Amhara elites were also brought into the fold through an Oromo-Amhara alliance that saw the retreat of TPLF to Mekelle.

Antagonism towards state-building projects which resemble an Emperor Menelik-style ‘victory through conquest’ and protracted ethnic conflicts have long been features of Ethiopia’s political landscape. But the country has never seen violence of such scale paired with such apathy and inability to intervention from the government. Politically and ethnically motivated assassinations have sent shock waves across the country, bringing the government’s ability to bring national unity among the divided nation into question.

Amhara and urban elites recognized an opportunity to do away with TPLF and its legacies: the Ethiopian constitution and ethnic federalism. However, doing away with ethnic federalism and the constitution depends on two factors. First, defeating their core defenders, the TPLF and Oromo opposition forces. And, second, securing public buy-ins for the geographic-based federalism they espouse.

Instability is utilized as a key strategy in achieving both these aims by the current government. Instability reinforces the perceived ‘evilness’ of ethnic-based politics, and, by pinning recent atrocities on promoters of ethnic-based politics, accusations of provocation against Oromo and TPLF opposition can be exploited to the government’s benefit.

Ethiopia faced widespread protests following the killing of the famous singer Hachalu Hundessa. This was used as a pretext by the government to arrest thousands of opposition members, including heavy-weight politicians such as Jawar Mohamed and Bekele Garba. Mass targeted arrests, disappearances, and co-option of the Qeerroo leaders left the Oromo opposition without a leader. Many Oromos were left shocked by the inhumane acts against them by one of their own.

In comparison to the violent skirmishes in Oromia, the conflict in Tigray is an open war. The conflict involves many different actors, including the ENDF, Amhara militias and special police, Eritrea, Somalia, and UAE, who reportedly provided drone support for Eritrean forces.

Actions underway in Tigray are war crimes, intent on destroying lives and taking the region “back to the Stone Age,” as per TPLF spokesperson Getachew Reda. This assessment is supported by Pekka Haavisto, the Finnish EU envoy to Ethiopia who said that Ethiopia’s leaders have told him they will “wipe out Tigrayans for 100 years,” an accusation the Ethiopian government denied.

Moreover, the war in Tigray, which was intended to last just several weeks, has now metastasized into a wider conflict, further demonstrating the pitfalls of using force to address political differences. With Tigray Defense Forces’s (TDF) recent resurgence and victory, it is clear that the war is here to stay.

Furthermore, the area in which the Oromo Liberation Army (OLA) operates has now moved inwards from the peripheries towards the center of Oromia.

I argue for a third way: paving an innovative path where a new social contract is designed through negotiation and continuous national dialogue. Unable to embark on such a path will put Ethiopia in a cycle of conflict.

Based on this assessment, here are three possible scenarios for the country:

1. Anarchy and dismemberment: the historic account of continuity in Ethiopia continues to be tyranny, with prolonged cruelty coupled with injustice and complete control over public life. Regimes function in this way until another group gets a chance to topple the incumbent. I believe Ethiopia is currently in this cycle. In reality, this scenario does immense harm to the country’s unity. Today, the conditions are similar to when we lost Eritrea and we now risk further losses. To this end, one should look at the dangers of ethnocentric agitations as a threatening factor to widespread civil war.

In this understanding, Amhara nationalists are among the most destabilizing political forces in the country and risk the disintegration of the Ethiopian state. New versions of Amhara-identity devoid of historical “Ethiopianism” are dangerous and represent a narrow form of ethnopolitical expression. Unless this phenomenon is reined-in and reconfigured to better engage mechanisms of multi-ethnic nation-building, it will cause a devastating end to the country as we know it. Chaos and mayhem will not be confined to just Ethiopia, but could spread to the whole Horn and new regional architectures may emerge.

Is Ethiopia coming together or falling apart?
By Ahmed Hassen

2. Reviving old ways: it appears the US and EU have given up on Abiy following allegations of war crimes in Tigray and the mismanaged democratic transition. Now, the US and EU must choose between the old and the new, and will likely choose the devil they know over the angel they don’t.

This means the reemergence of the old powers—Tegaru, Amhara, and Shewa Oromo (Orthodox Christian coalition)—to sustain the core Ethiopian nation, while excluding others in the periphery.

To this effect, their support might shift towards the abolishment of ethnic-based federalism and replacing it with geography-based federalism. This system will entertain multi-ethnic cultural diversity but makes sure that ethnic groups are not given an exclusive homeland like they have now and prevents the Balkanization of the country.

However, this recommendation is not tenable. Ethiopia’s binding principles are disintegrating, mistrust abounds among the three core powers, and the current coalition’s international reputation is severely affected due to the atrocities committed in Tigray. More importantly, the new generation of Ethiopians don’t accept the old way of power centralization.

The balance of power in Ethiopia has shifted from the Abyssinian empire builders of the north to the former subjects of the empire in the south; a shift that happened long before the death of Meles. The U.S. and the West must recognize this reality and thus facilitate the birth of a new system in Ethiopia by supporting the country’s democratic transition and help design a new social contract for the good of all.

3. More functional federalism through force or elite bargaining: Carl von Clausewitz aptly says, “war is a continuation of politics by other means.” In the absence of an infrastructure for conflict resolution, resorting to force seems to be a natural course in Ethiopia.

The old must accept a new era is imminent. Ethiopian recent history has shown that, usually, when the military engages with ethnic groups, ethnic militias eventually win. The best way to avoid this eventuality is to pave an innovative path: a new social contract through negotiation and continuous national dialogue.

This will hasten the early retirement of the old empire and the emergence of a new inclusive, just, and dynamic arrangement based on a collectively agreed and living constitution. This way is based on a principle of justice for all that protects minorities against the majority’s tyranny in each region.  To this end, several key steps can be taken:

Ahmed is a development worker with over a decade of experience working in Ethiopia and the Horn of Africa. He can be reached at ahmesau3@outlook.com