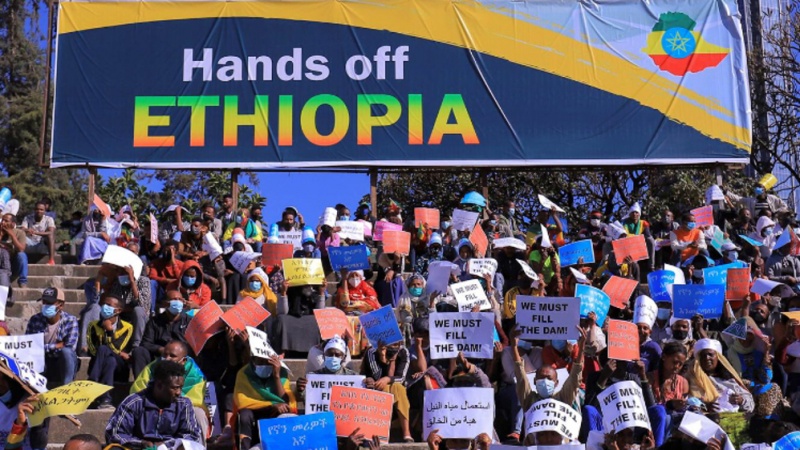 Conspiracy theories claiming that the United States is behind a devious stratagem against Ethiopia distract from credible accusations of human rights violations levied against the federal government.

The United States is destabilizing Ethiopia. At least, that is what Prime Minister Abiy Ahmed implied in his recent open letter to US President Joe Biden.

Disinformation campaigns from all sides in the Tigray war have been documented and studied; the latest strategy by the Ethiopian government has been to reframe its war as an anti-imperialist struggle against a US foreign policy establishment supporting the terrorist Tigray People’s Liberation Front (TPLF). This framing has proven especially relevant in the face of potential US-imposed sanctions.

It has gained enough traction to shape Ethiopian political discourse and has also been a powerful justification for the Ethiopian and Eritrean governments’ ongoing campaign against Tigray, promoted by partisan commentators like Jeff Pearce, and even Eritrean celebrities such as Tiffany Haddish and the father of the late rapper Nipsey Hussle, Dawit Ashgedom.

However, proponents of this argument often struggle to explain why the US government would try to destabilize Ethiopia, a long-time strategic US ally in the Horn, whose pro-market economic reforms are supported by Washington, and whose pre-war political reforms under Abiy were lauded by the highest US officials.

Indeed, the main arguments in favor of this theory demonstrate an abysmal level of analysis.

In the article shared by Tiffany Haddish, the only explanation offered was “dismantling the oldest independent African country” to serve as “a lesson to any and all Black countries and people who dare entertain radical ideas around controlling their own destiny”. US-based philosophy professor Messay Kebede similarly posits that the US, driven by pure racism, is “punishing” Ethiopia.

Such theories are weak as they cannot be tested and because they ask us to believe the US is willing to jeopardize its security and material interests in the Horn for an abstract, symbolic ‘victory.’

An alternative theory proposed by security analyst Ann Fitz-Gerald suggests that “the Tigray conflict with Ethiopia can be seen as a proxy battleground for external powers and a way to exert influence over Ethiopian policymakers.” In the Royal United Services Institute piece, Fitz-Gerald ambitiously attempts to unify US-China competition, neocolonialist mineral exploitation, and the Ethio-Egyptian Nile waters dispute into a cohesive theory but fails to make any meaningful connections.

Meanwhile, in an interview with Ethiopian state media, Lawrence Freeman bizarrely claimed that a small mysterious faction of the global “political-economic elite” is targeting Ethiopia for regime change.

In a viral blog article from June that received acclaim from some analysts—even being dubbed by one excitable tweep as the “most incisive article on US policy on Ethiopia”—Ethiopian-Canadian engineer Nemo Semret attempts to offer a robust explanation for why the US is “destabilizing” Ethiopia.

Nemo takes an almost Socratic approach to analyze different explanations of US imperialism, discarding each explanation that does not make sense (including the previously mentioned arguments). The final explanation he settles on to justify the theory of US imperialism is that the US is destabilizing its most important ally in the Horn to…..bump up the Egyptian president’s popularity.

“The moment [President Al-Sisi] shows weakness, he’s toast.  Like the oak tree in the fable, if he bends he breaks. And nothing makes him look weaker than Ethiopia going ahead with GERD despite his intransigence. Egypt will be fine but the current Egyptian government is at risk, and the best way to minimize that risk is to destabilize Ethiopia enough that GERD is stopped or at least delayed until it can be done in a ‘pliant’ way that makes Al Sisi look ‘strong’ domestically in Egypt.”

Here, Nemo is saying that in the dispute over the Grand Ethiopian Renaissance Dam (GERD), Abdel Fattah Al-Sisi needs to appear strong as to not be overthrown (presumably by the Muslim Brotherhood). How does this reshape our understanding of the war? We are to believe that the US is supporting the TPLF —which, when in power, adopted the Asian Tiger development model and rejected Western liberalism—as a means of undermining the Abiy regime for the purpose of protecting Al-Sisi’s reputation.

Academic Meron Gebreananaye describes this argument as “the national mythos of anti-colonial patriotism, and the rather intricate conspiracy theory that there is a sinister alliance positioned against the Grand Ethiopian Renaissance Dam.”

To begin, how do we know that Al-Sisi is under any significant threat? Nemo never demonstrates this, he simply insinuates it. If Al-Sisi was under threat from the Turkey-backed Muslim Brotherhood in neighboring Libya, how would the US destabilizing Ethiopia be more helpful to Egypt than simply providing security assistance?

Nemo also fails to explain how Al-Sisi will be a “toast” if he shows “weakness” by allowing Ethiopia to go ahead with GERD in light of the fact that his government hasn’t been toppled after making concessions in the Declaration of Principles in 2015, allowing a decade of GERD’s construction, and passively sitting by while Ethiopia started filling the reservoir, in explicit defiance of Egypt’s warnings.

After these past two years of filling, Egypt would surely show significant signs of instability by now. He certainly has not proved that the “best” way to stabilize the Egyptian regime is to criticize Abiy’s war efforts in Tigray. It seems a few basic questions reveal deep logical holes in Nemo’s argument.

Overall, the theory that the GERD crisis and the war are related, especially in terms of US foreign policy, rests on nothing but faith. This is evident in the differences in the Trump and Biden administrations’ responses to both.

“Hands Off Ethiopia”: A new phase in the Tigray disinformation campaign
By Meron Gebreananaye

The Republican administration responded to the outbreak of the war by immediately noting the TPLF’s attack on the Northern Command in a tweet by the then Secretary of State Mike Pompeo on 4 November 2020. Additionally, in a tweet on 17 November, Pompeo, the top US diplomat, “strongly condemned” the TPLF for attacking Eritrea, and urged the Ethiopian government to handle the conflict.

By the end of November, when the Tigray leadership was summarily defeated and Mekelle was taken, Pompeo called Abiy personally to encourage him on the “path to democracy.” Contrast this with Trump’s policy on GERD, which involved forcing Ethiopia to join GERD negotiations in Washington DC, forcefully insisting on mediating the discussions, drafting an agreement that blatantly favored Egypt, punitively withholding $264 million in aid from Ethiopia, and President Trump himself tacitly endorsing Egypt to bomb the dam.

Biden’s foreign policy team has voiced opposition to the war in Tigray, going as far as formally enacting a sanctions regime for all belligerents and repeatedly calling for a ceasefire and talks. On GERD, however, the US has formally de-linked the funds withheld by the Trump administration and expressed support for the African Union to lead negotiations.

Compared to its predecessor, the Biden administration has played a more passive role in the GERD dispute and has been relatively silent on the issue, signaling that it’s a lower foreign policy priority than the Tigray war. Most importantly, the gulf between the administrations’ approaches shows that their policy on Tigray is completely unrelated to their policy towards GERD.

Further, Nemo’s theory that Egypt and Sudan are conspiring with the US to sanction Ethiopia into poverty to halt its progress on GERD is partly undermined by the fact that both countries endorsed a UN statement by China essentially condemning US sanctions against developing countries. It is also hard to believe that the US is raising human rights concerns over Tigray as a means of pleasing Egypt when they are withholding, albeit reluctantly, hundreds of millions of dollars in development assistance to Egypt over human rights abuses.

All in all, this theory makes no sense. However, it doesn’t need to. The claim that Ethiopia is being “destabilized” by the US is simply a propaganda strategy, not a robust theory of international relations that can sustain criticism. The reasoning behind it is not based on facts or experience. Rather, it subsists on outrage generated from the perception of Western interference; it is purely emotional in nature.

This conspiracy theory is intentionally overly complex—requiring a myriad of logical steps, assumptions, and tenuous relationships to make sense—in order to mimic critical thought. It does this while serving the purpose of obscuring the horrendous atrocities committed by the Ethiopian and Eritrean federal troops and ensuing humanitarian disaster.

Indeed, Nemo’s article is laden with scientific and intellectual jargon such as “evolutionary pressure”, “Gell-Mann amnesia”, “Occam’s Razor”, and “null hypothesis” to give it the veneer of authority, scientific objectivity, and sophisticated reasoning. Despite this, the actual content of his reasoning, as was just demonstrated, isn’t based on any empirical reality and displays more characteristics of superstition than scientific knowledge.

In her essay, On the Nature of Totalitarianism, political scientist Hannah Arendt explains the purpose of this type of reasoning: to “mislead [the masses] further into the wilderness of mere abstract logical deductions and conclusions.” This “logicality” distracts people from a totalitarian regime’s wrongdoings with mental gymnastics, to “emancipate themselves from real experience and the shock of reality by luring them into a fool’s paradise”.

In Ethiopia, this anti-US campaign feeds on the fact of US power, citizens’ genuine anxiety over neocolonial interventionism, and offers a sense of empowerment in resistance to this agenda, animated by slogans such as “Hands Off Ethiopia!” and popular pro-government rallies.

Evidently, the anti-imperialist aesthetic, and the ‘logic’ underpinning it, has been effective in rallying support for the regime, not just from Ethiopians but foreign commentators like Ann Garrison of Black Agenda Report, Ben Norton of The Grayzone, Rania Khalek of Breakthrough News, among many others.

In case it wasn’t obvious how proponents of this theory create support for the government, Nemo goes out of his way to defend the integrity of the controversial Ethiopian election, which saw the incumbent Prosperity Party win 94 percent of parliamentary seats.

EIEP: One vote forwards, two steps back for Ethiopian democracy
By Mistir Sew

Among Ethiopians and the diaspora, GERD has been the perfect mobilization tool, given its nationalistic symbolism—that is, as long as you are willing to ignore the inconvenient fact that the late Prime Minister, TPLF’s Meles Zenawi was its chief architect.

Scholars observe that, historically, mega-dams have “served as highly visible, spectacular statements that new nations were literally soaring toward development, by mastering rivers and reaching for the sky. Constructions on such a scale rendered material the trope of nation-building: to erect a mega-dam was literally to concretize the postcolonial nation’s modernity, prosperity, and autonomy”.

Abiy and the Prosperity Party have masterfully manipulated Ethiopians’ patriotic support for GERD to manufacture consent for war crimes, including sexual violence and the destruction of civilian infrastructure, as well as the incarceration and extrajudicial murder of journalists. At the same time, they are trying to avoid accountability internationally and at home. This same strategy was deployed by the Derg in the 1980s.

Ultimately, as a theory, the notion of US imperial aggression against Ethiopia is a conclusion in search of evidence. In reality, it is the latest in a series of disinformation waves from the government to absolve itself of scrutiny over the humanitarian crisis it has helped create in Tigray. More than anyone else, the millions of Tigrayans on the brink of starvation in a blockaded region are most harmed by this narrative.

Main photo: Ethiopian pro federal government demonstrators at a rally in Addis Abeba protesting US pressure on Ethiopia; May 2021; Reutres.

Moriah is an independent researcher and economics professor studying the conflict in Northern Ethiopia. He has expertise in global business, economic governance, and international politics.