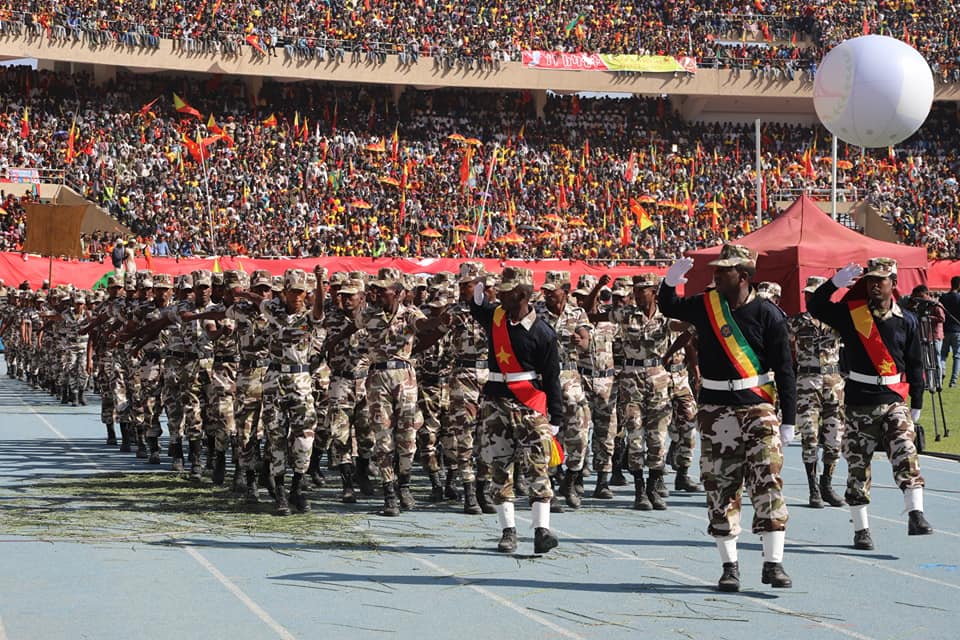 At different points in Ethiopia’s civil war, both sides have wished to see an end to the large-scale conflict on their own terms. On the one hand, some Ethiopians wanted to see the TPLF triumphantly marching towards the capital, an ending similar to the recent events in Afghanistan. Others wanted to see TPLF annihilated, like what has happened to the Tamil Tigers during the Sri Lankan civil war.

But, amidst the war on the ground and the accompanying social media warfare, a critical question has been forgotten: What exactly does the Tigray People’s Liberation Front (TPLF) want?

TPLF’s inception took place five decades ago at the Haile Selassie I University, as it was called then. TPLF’s founding ideology was anchored in the pages of the famous essay “On the Question of Nationalities in Ethiopia,” written in 1969 by student activist leader Wallelign Mekonnen; five years later, in September 1974, the Tigrayan National Organization was established, which later became the TPLF.

Although the essay’s lofty title promised an in-depth analysis, it fell short of prescribing a cogent solution to the problem it raised.

The handful of young, would-be TPLF leaders, like many others in the student movement, accepted the essay’s position of promoting ethnic-nationalisms and blaming northern highlanders—mainly Amhara—domination for Ethiopia’s problem.

This rhetoric was then evident in the 1976 TPLF manifesto that blames Amhara national subjugation for the plight of Tigray and declares a fight against it.

Amhara nationalism at the polls in Ethiopia
by Mistir Sew

Proclaiming Marxist-Leninist ideals, including universal proletarian values, TPLF attempted to reconcile two seemingly contradictory positions. On the one hand, they indicted the Amhara nation for what they perceived to be a national subjugation and, on the other, they celebrated the universalist communist ideology. The latter included an attempt to domesticate the imperceptible ideology of Enver Hoxha’s self-isolated Albania of the 1970s and 80s.

TPLF’s raison d’être and unwavering commitment to its founding credo is still alive, and often serves as a marching order.

For example, a statement authored by Lt General Tsadkan Gebretensae, a member of the Central Command of Tigray Defense Forces (TDF), published in December 2021 reads:

“Ethiopia is a nation of nations, and the only way forward for the country is to recognize this. There can be no return to empire building or the domination of one group over the other.”

The group implicated as a ‘dominant group’, of course, is easy to guess.

For and against freedom

The 1980s were one of the darkest periods of Ethiopia’s long history. The war between Eritrean liberation fronts and Ethiopian forces had reached its climax, while the war in Tigray gathered momentum as thousands of Tigrayan youth and intellectuals, in part saddened by the famine ravaging Tigray, joined the TPLF in the thousands.

The famine in Tigray presented an opportunity for much-needed publicity for the TPLF and provided it with material and financial resources. Millions of dollars and logistical resources poured in from the international community.

It was amid this apocalyptic moment that the Ethiopian army evacuated from Tigray in February 1989, effectively leaving Tigray to TPLF. After 15 years of armed struggle, Tigray became “free.” Meanwhile, the war in Eritrea was into its third decade.

Becoming independent within such a short time had given TPLF a sense of invincibility. However, it only took a few months before a new realization set in and “freedom” became something to escape from.

After all, TPLF elites realized that being free from Ethiopia is not enough—for Tigray to be truly free, they had to come to the center and rule over a country that they fought to unshackle Tigray from.

In part, this is what led to the formation of the Ethiopian People’s Revolutionary Democratic Front (EPRDF) in 1988, a political and military front consisting of groups representing major Ethiopian ethnic groups.

The front, under the political and military leadership of TPLF, quickly went into action in the early 1990s and defeated the demoralized Ethiopian army to effectively “liberate” Ethiopia from Amhara domination.

On top of the long demand for autonomy by other ethnic liberation fronts, the ethnic element of the Ethiopian federation and the constitutional right of ethnic groups to secede from Ethiopia were ratified because TPLF wanted to ensure the reality of two contradictory, ambiguous ambitions—to be ‘free from’ and also ‘to reign over’ Ethiopia.

Ironically, a liberation front that fought to end the domination of one ethnic group started its tenure as an oppressive and dominant ethnic organization ruling with an iron fist. TPLF, once again, proved its ambiguous nature.

After EPRDF’s state capture, the guilt-ridden international community was ready to repent for having allowed millions to die in a preventable famine and thus was eager to assist the new administration. The International Monetary Fund, World Bank, and western donors lined up to lend and donate billions of dollars.

The result was a success.

Furthermore, as billions of dollars in foreign direct investment—mainly from investors desperately seeking cheap labor and free access to resources—were coming in, the country was on the path to becoming a middle-income nation.

However, the democratic promise offered to Ethiopians in the form of electoral freedom at the 2005 election exposed TPLF’s true repressive nature. As a result of this failed experiment, an era of deep mutual distrust between TPLF and the rest of Ethiopia began.

A party that went as far as ensuring self-determination to ethnic groups via Article 39 of the constitution couldn’t survive the true test of democracy when ethnic groups said no to the EPRDF under its domination.

The mid-2010s uprising led by Oromo youth known as ‘Qeerroo’ and then followed by the ‘Fano’ Amhara youth shook EPDRF to its core. TPLF became more and more isolated, even from the other members of the EPRDF. As the Amhara and Oromo parties of the EPRDF were unhappy with the long domination of the TPLF, they sidelined TPLF, aligned themselves with protestors, and used the opportunity to extend their tenure as reformists.

TPLF, despite continuous claims that it stood for ethnic equality and regional autonomy, has never considered its allies as equals. Rather, it treated them as its own creations—as helpless entities that existed to give it validation and whose constituent nations should be thankful for having been liberated from oppression. Some EPRDF allies like the parties from Afar and Somali regions were not even found competent enough by the TPLF to join the front.

But, as ironic as it may seem, it was actually the EPRDF that gave TPLF the legitimacy to govern, only to take it away after 27 years. After being sidelined by EPRDF, the only safe place for TPLF was Tigray itself, which had been free since 1989.

However, to survive in Tigray and in isolation, TPLF had to reinvent itself and once again become a freedom fighter—that was easy to do, thanks to its ambiguous nature.

After rejecting the federal government’s call for the postponement of the national election, conducting an unconstitutional regional election in September 2020, and then openly delegitimizing the Ethiopian government, TPLF’s new path to create a de facto nation-state in Tigray appeared to be a hard reality.

TPLF was using self-imposed isolation as an opportunity to tell the world that Tigray is under siege by Ethiopian and Eritrean leaders who were conspiring against it. A road map was prepared and rehearsed to restart the struggle for “freedom,” while daily bravado and belligerent displays of power became common.

The reactions from both Ethiopia and Eritrea were similar. The leaders of both countries tried to show their readiness for the inevitable war by military posturing.

There is, of course, disagreement about the genealogy of the war, and TPLF and its supporters say it is the governments of Ethiopia and Eritrea that started the war. But, as much as they can claim TPLF acted only to preempt an inevitable aggression, Ethiopia, and also Eritrea, shouldn’t be denied the right to claim likewise.

Indeed, in light of the well-trained special forces inside of Tigray, a large number of high ranking Ethiopian army officers of Tigrayan origin suspected to be loyal to the TPLF, and the largest army command inside of Tigray with commanders that could defect at any given moment, Ethiopia had legitimate reasons to prepare.

Retrospectively, first holding an unauthorized election and then launching a war may have been TPLF’s attempt to assert sovereignty followed by statehood.

But, when the war turned out to be a dismal failure, it seems like TPLF quickly adopted another strategy. It used the war, the tragic human rights abuses at the hands of federal troops and their allies, and the widespread humanitarian crisis in Tigray for the purpose of shaping the Tigrayan psyche and laying fertile ground for independent nationhood.

With the help of effective campaigning from the Tigrayan diaspora and some support from the international community, TPLF has been successful in portraying the war in Tigray as a genocidal war. Accordingly, many Tigrayans now see Tigray as a nation subjected to genocide that needs to achieve nationhood as soon as possible.

Whether what has happened in Tigray can be labeled as genocide or not is a difficult question that only experts and legal authorities on the matter can answer. To date, however, no relevant national or international institution has labeled it as such.

But, as far as the TPLF is concerned, pushing the narrative of Tigray being a victim of genocide is important to intensify Tigray nationalism to the end of nationhood.

The first 14 years of TPLF’s existence can be defined as an armed struggle waged to free Tigray from the shackles of the Ethiopian empire, and its 27 years in power highlight TPLF’s ambiguity as it struggles to escape from the very freedom it achieved.

The ever-elusive journey of TPLF that took the country of 110 million and the region to the gates of hell and back may continue. Even on fundamental matters such as the secession of Tigray, TPLF is not free from ambiguity. Sure, the general perception is that TPLF is now for Tigray nationhood; but, true to its ambiguous nature, the party is not yet committed to this view.

Leaving that aside, even if a free Tigray calls itself independent, it only means it is free of political relationships. However, as a major component of the complicated system called Ethiopia, it will forever remain entangled with Ethiopia.

Nations, it must be noted, are more than political and geographical boundaries. They are more than the sum of their parts; they are emergent properties. What makes a group of people or a region a separate entity or state is not a simple political declaration of independence. In a complex political system like Ethiopia, there’s a more intricate bond between peoples and regions.

To bring peace, or at least to mitigate the mayhem that engulfed the region, Tigray’s secession from Ethiopia may appear to be an attractive and viable solution. However, looking at what happened to Eritrea and South Sudan, one cannot have confidence that this will guarantee peace.

Many considered separating Eritrea and Ethiopia as a peaceful solution for a troubled region. Nonetheless, the two countries never left each other alone—and actually went to war from 1998 to 2000. No doubt this will be a reoccurring phenomenon with a potential Tigray secession.

Finally, although surviving within a complex system of relations such as Ethiopia requires accepting ambiguity as a coping mechanism, when ambiguity is the building block of one’s unique identity as has been the case with the TPLF, it compels us to imagine a future both ‘with’ as well as ‘without’ TPLF.

Berhanu is an economics lecturer at Mount Royal University in Calgary, Canada.