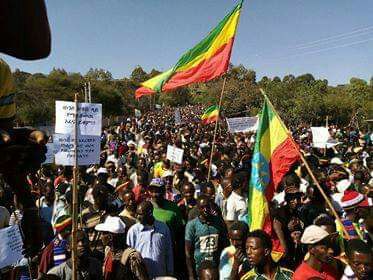 As ethnic groups in southern Ethiopia demand their own states, it is important to examine how previous efforts to change administrative structures worked out in the region.

Segen Area People’s Zone was established in 2011 in the Southern Nations, Nationalities and Peoples’ Regional State (SNNPRS). It grouped Amaro, Burji, Dirashe and Konso Special Woredas and the newly formed Ale Woreda. Before 2011, the Ale were a minority in Konso and Dirashe Special Woredas (SWs).

Since the introduction of ethnic federalism in 1995, Konso, Amaro, Burji and Dirashe were SWs, which are administrative districts directly accountable to regions (normal woredas are accountable to zones).

The formation of Segen was the major cause of protests and then crackdown in Konso and neighboring areas.

The main reason for the formation of Segen were complications surrounding Ale Woreda.

The Ale demanded their own district for decades and secured woreda status in 2011 after a 2010 decision by the ruling Southern Ethiopian Peoples’ Democratic Movement (SEPDM). The question then was how to link it to SNNPRS, since all nearby districts were SWs.

Three options were available: incorporate Ale into South Omo Zone, promote it to SW status, or establish a new zone. Each of these had the potential to trigger other political issues.

An attempt was made to put Ale in South Omo, but it was rejected by the multi-ethnic zone. The second option was considering an extra unwanted administrative cost, so SEPDM opted to demote the Amaro, Burji, Dirashe and Konso in order to establish Segen.

That was when the Konso opposed this reduction in their autonomy.

If properly designed, a new administrative tier can add to the treasury by increasing growth. But the request needs to come from the people; there must be adequate consultation; it should be carefully designed and implemented; and there must be good administration.

Segen Zone met none of the tests for a successful sub-federal structure in a multiethnic context.

A mistaken selection of the administrative center was the next error. Not only Konso but also the other groups argued for the seat to be at Karat, Konso’s administrative capital that lies on a road junction linking all the woredas.

But the zone’s architects placed it in a remote location, Gumayide.  The Burji, Amaro and Ale had to go through Karat to reach Gumayide. This was bad for the economy, and it didn’t have basic infrastructure like roads and administrative facilities.

The new zone also failed to consider communal tensions. While the ethnic groups mutually coexisted for centuries, they have fought over farm and grazing land. The 2011 conflict between Konso and Dirashe and border dispute between Ale and Konso are recent examples. Disputes were not amicably settled before Segen was established. Instead there was a kind of forced integration experiment.

The stillborn zone was immediately snarled with maladministration. There were complaints over unfair budget division (with no clear formula), unfair allocation of zonal posts, quotas for new college trainees and various infrastructure- and service-related issues, along with accusations against the zonal justice department.

Konso started to protest Segen maladministration early in 2014 and recalled its civil servants and officials who worked at the zone. In the last week of the year, a Konso Zone agenda gathered strength. Public mobilization occurred by protest organizers, but officials didn’t act. This gave rise to a series of misunderstandings and a deadlock that generated prolonged repression in Konso.

Through 2015 and 2016, delegates went to regional and federal government offices to present the request for divorce from Segen. But in Nov. 2015, regional special police intervened and arrested key Konso figures and imprisoned them at Arba Minch police station for a week.

Deaths occurred due to arson

A written letter demanding a Konso Zone and a petition with thousands of signatures was lodged with the regional council and SEPDM. On June 29, 2016 the regional Council of Nationalities ruled the request irrelevant in light of the objectives of the constitution and untimely. There was an appeal to the House of Federation (HoF), which affirmed the rejection.

The decision of the HoF heightened tensions between the government and the representatives. This caused two major events: the burning of Aba Roba and Aylota Dokatu kebeles on Sep. 19 and government force against leading figures.

Deaths occurred due to the arson, which no one has been held responsible for. Over the course of three years, many lost lives, sustained permanent injuries, and were detained. Beatings by security forces were common.

The failure of the experiment has important implications. Locally, it marked the restoration of mistrust and tensions between the area’s groups. At regional level, the failure of the integrative model provides useful evidence for the current autonomy campaigns.

Over the same period, conflicts also erupted in Oromia and Amhara regions and later in other parts of SNNPRS like Arba Minch and Wolkait. The government of Hailemariam Desalegn released some prisoners, but not those in Konso. Abiy Ahmed’s administration ordered nationwide releases, including Konso.

In early November, the SNNPRS Council affirmed the Konso zonal demand along with Halaba and Gofa Zones, and 44 new woredas. The status of Amaro, Burji, Dirashe and Ale woredas was not settled. SEPDM has called successive meetings, but no agreement was reached, except for Ale Wereda to become a SW. The remaining three want to be zones.

Subsequently, Wolayta Zone voted for Wolayta region on Nov. 12, followed by Kaffa Zone on Nov. 15, Gurage Zone on Nov. 26 and Gamo on Dec. 12. Hadiya Zone has also voted for statehood.

Other demands are underway. On Dec. 18, the Nyangatom called for South Omo Zone to become a region in a protest, and raised security and development issues. The regional government is saturated by similar questions.

Sidama’s request is so far advanced that a request to the electoral board to arrange a referendum been received positively, so there’s a possibility the vote will be held immediately after the board is restructured. Implementation of the new zones and woredas is underway and they are scheduled to be operational by March.

After SEPDM approved moves towards greater self-determination at its 10th congress, it later responded negatively to the increasing demands. On Nov. 26, SEPDM said the salvo of demands did not follow from the party’s resolution.

But the demands are the sovereign right of the people concerned: the right to self-determination is guaranteed under both federal and regional constitutions. The SNNPRS constitution does not set a statutory precondition that demands shall adhere to the ruling party’s decision.

SEPDM is therefore placing its party resolution above the exercise of legal right; a right which the constitution stipulates is unconditional. And not only would blocking be unconstitutional, it would be a contradiction, as the three zones, 44 woredas and Sidama’s request came on the back of the SEPDM resolution. Another instance of contradiction is the Konso case, which it previously rejected.

SEPDM has to align with the political mood

It seems that the previous study showed little foresight. Now it needs to assess who will be grouped with whom for administrative purpose. And what if the study complicates the problem? Furthermore, the federal government has established a commission on borders and identity. Will the two inquiries work together or independently?

The failures, contradictions, and foot-dragging suggest SEPDM is either not willing or not able to solve the multiple self-determination questions across Southern Nations.

The nationwide political trend, which seems to have learned from past mistakes, is towards promoting the right to self-determination.

SEPDM has to align with the political mood and address the various demands according to the constitution. The restructuring study must be focused on problem-solving and findings should not be imposed on concerned people.

If structures are decided in an ill-advised manner, they are likely to fail. The Segen zone experience teaches this.

The current splitting down south is due to a lack of prudence in design. Persisting with a defective approach will only lead to even more dramatic splits; it will not bring the Southern Nations closer together.