The Rayan people want an end to rule by Tigray 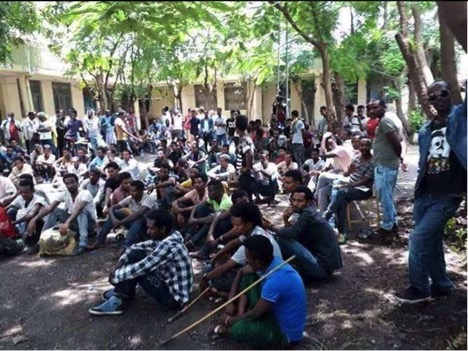 The protests in Raya during the ongoing national transition can be traced back directly to Ethiopia’s last political transition.

The TPLF-dominated EPRDF replaced the existing administrative regions called kifle-hagers and organized the country into regional states based on ethnicity and language. The EPRDF’s opponents believe this federal system resulted in ethnic conflicts that linger to this day.

As part of the arrangements, ethnically non-Tigrayan and non-Tigrigna speaking communities from the then Gondar and Wollo kifle-hagers (now parts of Amhara Regional State) became part of Tigray Regional State. Members of these communities were never happy at their inclusion in Tigray, but the TPLF largely crushed any resistance. I was in high school then in the district and recollect the events that followed the incorporation of Raya into Southern Tigray Zone. When the Rayan people asked to be recognized as Rayan in 1993, the Tigray authorities responded to peaceful demonstrators with live bullets. Eyewitnesses said Tigray’s government detained youth en masse and killed students.

The issue then simmered for decades.

Last year, following the removal of most TPLF officials from the federal government, Rayan activists brought the tense relationship between Tigray and the Rayan people to the attention of Addis Ababa.

According to Abate Wolde, a community leader in Waja–Timuga, in July 2018, the confrontation between regional security forces and the people of Waja-Timuga caused the death of two young men, Alemu Biruye and Adino Belay. The community leader said that as a result the federal government sent the military and deployed two battalions in the Waja-Timuga area. Following the deployment of the battalions, the regional forces left the area and settled in the Mehony area.

The Rayan Identity and Self Administration Grand Committee leaders Dejene Assefa and Agezew Hidaru said that on on Aug. 17, the head of the security forces deployed in Korem shot dead an innocent person who went by the name Zinabu America. These sources ascertain that the only thing that the victim said was: “I am not a Tigraway, I am a Rayan; and Korem is not Tigray, it is Raya.”

In the ensuing days, Tigray sent security forces that were settled in the Mehony area via the southern route to Korem via the serpentine road of Grat Kahsu. Also, another battalion was sent from the North to Korem via Maichew.

According to sources, they detained youth and took them to secret detention centers, where they remain. Eyewitnesses said security forces also went to Alamata and Waja-Timuga. The region recruited close to 30,000 potential militiamen, who were taken to training facilities in central Tigray. The new militia have been promised 2,000 Birr each a month after they complete their training and shall be deployed to control their communities.

Dejene claims that Tigray recently moved Tigrayans to Alamata Woreda where officials provided them with land. But, according to the activist, Rayan members of the Alamata City administration cabinet defied the order, as Rayans have been waiting for several years. Regardless, the order was implemented, he claims. The Rayan committee leaders say that Tigrayan security forces harassed Rayan people in Alamata, Ayer Marefia, and Waja-Timuga. For example at the end of August, Tigrayan courts in Alamata Woreda issued warrants to detain 149 young men in Ayer Marefia, and Waja-Timuga. These young people did nothing wrong except support the new prime minister by wearing T-shirts with his picture.

Following the invasion of the towns and villages by regional security forces, close to 550 young men were forced to flee Alamata, Ayer Marefia, and Waja-Timuga. They are staying in a temporary shelter in Kobo Raya in Amhara.

The Rayan Committee says that unless the federal government intervenes, the fate of these young people will be the same as that of the Palestinians who fled during the six-day war. That is because Tigray does not need the Rayan people, but their land. Forced displacements, disappearances and mass detentions are rife.

Furthermore, even if Tigray returned property confiscated by the Derg in Tigray, it failed to do so in Raya. The Rayan committee has records of huge blocks of land that Tigray took from local farmers in the name of investment.

The committee has confirmed that veteran TPLF leaders own the majority of these large plots. Some other fertile areas have been distributed to new settlers from Tigray, including demobilized ex-guerrilla fighters in Alamata and Mehony areas.

The purpose of settling Tigrayans in Rayan lands is believed to be to change the demographic composition. To that effect, not only has Tigray confiscated the farmers’ land but also forced the Rayan population to learn Tigrigna in schools.

The committee complains that TPLF has done everything to remove Rayans from their land, and it has received some support for its positions from Amhara’s government, increasing dangerous tensions.

There are more than 550 people sheltered in Kobo, Amhara region. These displaced people cannot return to their hometowns without facing repercussions. Only last week, the Tigray government charged 31 Rayans with terrorism and arrested four of them, while the other 27 fled.

Because of such treatment, the Rayan activists want administrative autonomy within Amhara region, as the Rayan people have closer affinity with Amhara. The first step would be a referendum, but that needs to be approved by Tigray’s government.

On Oct. 21, thousands of demonstrators peacefully marched through the main square of Alamata town voicing opposition to their inclusion in Tigray. In response, regional forces reportedly killed nine and wounded 20.

After the Rayan activists highlighted the issue, the youth in some Amhara towns prevented the shipment of sheep and grains to Tigray, protesting against the killing of innocent Rayan youth. The activists are working hard to bring to light every crime that TPLF commits on the Rayan people.

In outspoken opposition to the Raya policy, Zadig Abraha, a former federal state minister, has left TPLF. Andargu Berhe, an ex-diplomat at the Ethiopian Embassy in Kenya, and currently the Sudan desk expert in the Ministry of Foreign Affairs, also resigned from the party.

With increasingly widespread acknowledgement of the injustice of the situation, there is a need for the government in Addis Ababa to listen to the Rayan people’s grievances before it deteriorates further.

Haileab is a professional engineer and a Rayan activist based in Tennessee, USA