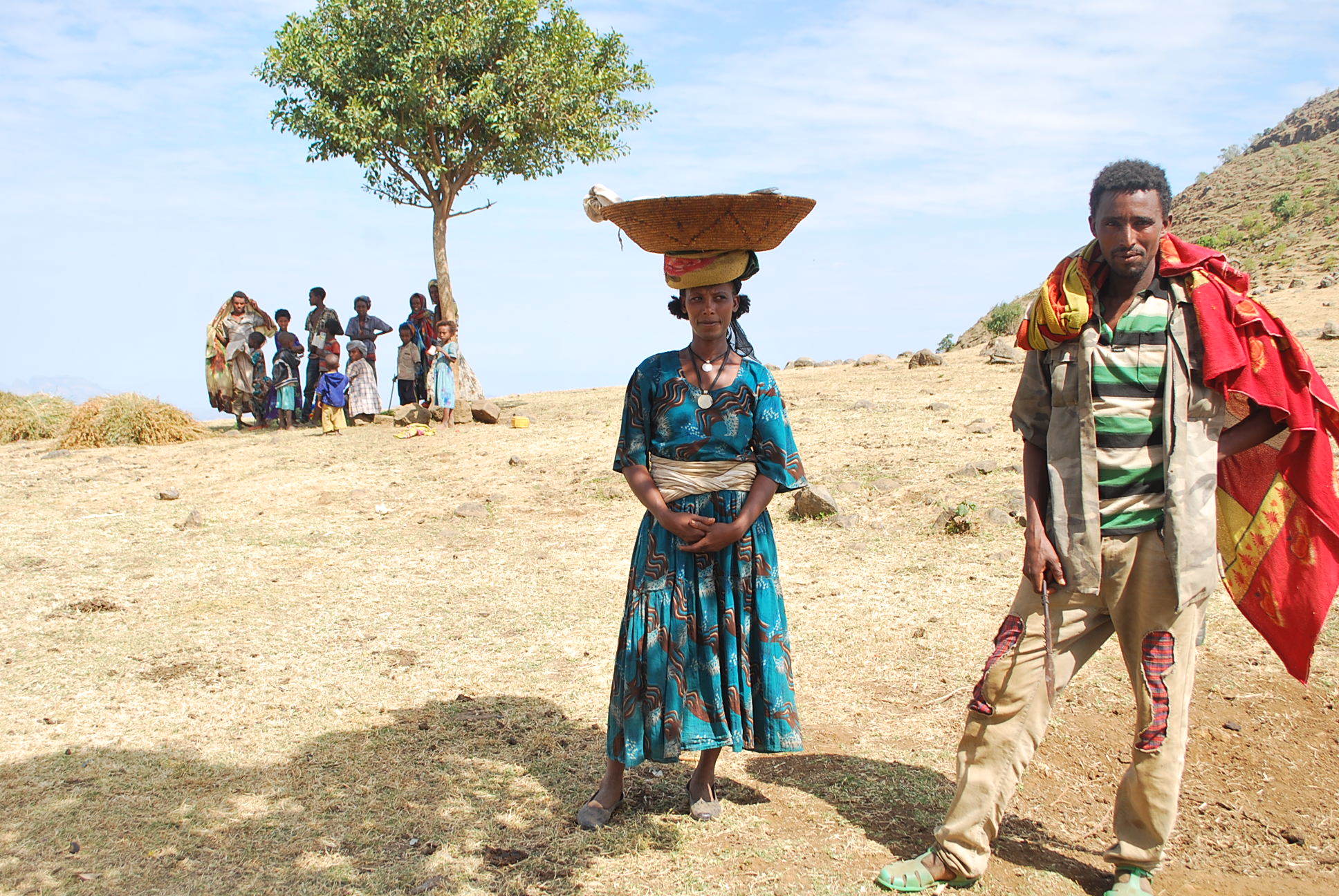 The agropastoral Qemant division of the Agaw peoples on the temperate Ethiopian plateau has been in the news of late.

The Agaw peoples are the principal, original, seed-agropastoralist inhabitants now enclaved across north-central Ethiopia and Eritrea. They once covered a contiguous territory in this region. About 523 C.E., visiting Greek, Cosmas, noted a monument at Adulis mentioned the Agaw and that the Aksumites exchanged oxen, iron, and salt for gold in the territory of some Agaw.

At one time, all Agaw spoke languages of the Central Cushitic subbranch of the Cushitic branch of the Afroasiatic language family. Today, some persons identifying themselves as a particular kind of Agaw speak only Amharic, or Tigrinya, or Tigre all of the (Ethio)Semitic branch of Afroasiatic. Today, most Agaw are Ethiopian Orthodox Christians; some are Protestants; among the Bilin Agaw, most are Muslims. Qemant speaking and not speaking Qemant totaled 172,291 in the 1994 census. In 2019 this number is larger.

Prominent researchers found the Agaw region to be a world center of agricultural origins. Nicholai I. Vavilov—noted Soviet geneticist, agronomist, and botanist—with whom anti-science Stalin clashed because of the scholar’s scientific methodology, conducted pioneering research on crops across the world, including Ethiopia. Seeking to combat global starvation, sentenced to death, Vavilov died of starvation in prison.

George P. Murdock, an American anthropologist, explained the past prominence of the Agaw in his encyclopedic Africa,1959, on the societies of that continent, “all indications point to the Agau as one of the culturally most creative peoples on the entire continent.” According to Murdock, the ancestral Agaw both adopted crops from other places, producing new varieties of wheat, barley, and sorghum, and experimented with local wild plants, generating new cultigens such as teff and finger millet.

Expansion of the ancestral Agaw peoples across north-central Ethiopia was during a later manifestation of the Agricultural (Neolithic) Revolution. The earth’s current interglacial (Holocene epoch), beginning around 11,700 years ago, followed the last ice age. During the epoch’s beginning, in the Fertile Crescent of the Middle East, the primary Agricultural Revolution had settled communities experimenting with technologies of plant and animal domestication, eventually supporting centralized politico-economic organizations, overseeing humans’ ecological changes including deforestation, irrigation, and soil erosion.

The Agricultural Revolution marked the change in food/energy getting largely from semi-mobile, hunting-gathering groups to settled villages and, eventually, to those developing into towns and cities. In the humans’ adaptation to the physical environment, these last two were functionally effective through specialist division of labor, writing, and accounting and their recording, storage, and analysis of information. This revolution occurred elsewhere in the world after that of the Middle East.

The Neolithic Demographic Increase, regarding its growing dense population, is a concomitant of the Agricultural Revolution. This growth resulted from the revolution’s efficient food/energy production and the means to store and transport it. Demographic increase put pressure on finite arable land and water resources.

Efficient food/energy production beyond subsistence levels for agriculturalists supported regulating, authoritative leaders, a priesthood intermediary between people and supernaturalism through faithful ritual, and a military having tactical specialties for social control and war with other polities.

After the last ice age, from demographic, expansive growth, great population migrations of agriculturalists and herders of livestock began. Populations possessing either or both technologies expanded given their gradual “revolution” of a stable energy source. The earlier peoples having these technological returns on labor pushed aside or absorbed hunter-gatherers, taking and ecologically changing their lands.

In the Ethiopian center, where do the Agaw peoples fit into a later part of the Agricultural Revolution and its Demographic Increase? The recorded enclaves and vestiges of various Agaw peoples (nineteenth century-present) indicate a once extensive, unbroken location in northern and north-central Ethiopia. The sociopolitical structures of the traditional Agaw societies are near impossible to deduce. However, the superordinate Keber moiety ritually and politically subjugating the subordinate Yetanti moiety of Qemant society could denote a structure of what was originally a conquest chiefdom.

Christopher Ehret posits that “Proto-Central Cushitic, on the basis of the modern distribution of Agew languages, would have to be placed in the northern Ethiopian highlands”; moreover “the northward extensions of Amharic over the past thousand years must frequently have been into former Agew country”. Robert Hetzron explains, Agaw “most probably constitutes the most significant substratum of the Ethiopian Semitic languages”

A West Eurasian genetic backflow into the Horn of Africa dates to about 3,000 years ago. This backflow came from a population closely related to early Neolithic farmers, who had colonized Europe 1000 years earlier from Anatolia, a northwestern outlier of the Fertile Crescent. The Neolithic population expansion into southern Europe through central Anatolia also moved into the Horn of Africa when Fertile Crescent crops (for example, wheat, barley, and lentils) also arrived there some 3,000 years ago.

This suggests “the direct descendants of the farmers that brought agriculture into Europe may have also played a role in the development of new forms of food production in the Horn of Africa.” Furthermore, “An analysis with haplotype sharing also identified a connection between contemporary Ethiopians and Anatolia. A genetic haplotype is a group of modifications in DNA usually inherited jointly from a common ancestral type.

A population movement and diffusion of culture from Southwestern Arabia to the Agaw region was early posited by Carlo Conti Rossini in Storia d’Etiopia in 1928 and Edward Ullendorff, The Ethiopians, 1960. Recent archeology indicates colonization of the northern Horn from southwestern Arabian states, such as Saba, was small-scale and brief, probably entailing elites using military forces. Since the second millennium B.C.E., settlements of local farming folk existed in the northern Horn.

What about the heated question of are Falasha/Beta Esrael in any sense, Jews? In 1959, as an undergraduate at UCLA, prominent Ethiopicist Wolf Leslau explained at length to me that “the Falasha are not Jews,” explicated in his Falasha Anthology, 1951. He repeated this in conversations of 1963 and 1988. During 1984-85 and 1991, the Israeli Armed Forces, U.S. Air Force, and U.S. CIA evacuated almost 15,000 Beta Esrael to Israel; few if any remain in northeastern Africa Not all Ayhud were Falasha; the label had a derogatory meaning for many Ethiopian Christians.

Jon Abbink posits that Beta Israel ethnicity as an early 15th century occurrence in the Amharization of the Begemder and Wegerer regions. Beta Israeli culture, language, and society can no longer be researched in its context of homeland and interethnic connections there. The Qemant and most Beta Esrael had an Agaw cultural and language base. In the 20th century Beta Esrael identified more and more with modern Judaism; thus, distancing themselves from a commonality with the Qemant.

Gamst holds that cultural and material rewards from modern Jewish and Christian missionaries bent on converting the Beta Esrael to “true” Judaism or “untouchable” Christianity influence this distancing. Daniel P. Summerfield, after exhaustive research, summarizes his “Conclusion” chapter, “… the concept of an ‘Ethiopian Jew’ is an invented twentieth century phenomenon, imposed on the Falashas by external forces,”

The romantic idea of Beta Esrael as originally Jews from the Holy Land is not supported by genetic studies.

Currently, the Qemant undergo cultural movements of nativism within revitalizationism, explicable by American anthropologist Ralph Linton’s, “Nativistic Movements.” The overriding revitalization includes a deliberate conscious effort by members of a society to preserve and or restore their culture under assault and variously diminished by another culture. As among the Qemant, revitalization could be largely nativistic, “Any conscious, organized attempt on the part of a society’s members to revive or perpetuate selected aspects of its culture”. Culture here is used to mean all of a population’s socially learned actions.

Augmenting, nativism usually means ethnocentric reactions of a population under stress seeking homeostasis for its culture and society against another sociocultural system, typically an overpowering one in continuous contact and the source of acculturating the reacting people, whose culture thereby faces destruction. A source of stress is often political subordination with strong pressure toward acculturation. Successful nativistic resistance against denominator acculturation occurs, for example, among the Irish, Scots, Mohawks, Basques, Navaho, and Maoris. Through about 1950, most scholars and U.S. government officials incorrectly thought Native Americans would assimilate and their nations would dissolve and fade away.

Native Ojibwe-American anthropologist David Treuer examines how Native American cultures did not become lost since the massacre at Wounded Knee but, instead, now develop in a revival specifying and protecting Native American rights under U.S. law. Their maxim became organize!

Apart from use of law, the resiliency of Native American nations includes access to federal and other funding, thus, by the 1970s, helping the nations begin an era of their self-determination. “Red Power” came to the fore as a modern activist umbrella for their nativism. Reinforcing, the broad American Indian Movement (AIM) emerged as successfully activist. “The trail of broken treaties” was among the smaller movements effectively countering U.S. Congressional intent to accelerate assimilation of Native Americans into Anglo society.

Eurocentric definitions of revivalistic and nativistic movements ordinarily limit them to whites’ colonialism and its politico-economic domination. They, have always occurred outside of the European sphere of activity, for example Han (Chinese) over cultures inside China and Amhara over cultures inside the expanding Abyssinian state. Throughout his seminal article, Linton includes nativistic exemplifications from modern cultures.

In accord with the preceding paragraphs and the current state of Qemant affairs, Gamst’s summary of 1969 on the Qemant future. “the end of Qemant society seems imminent,” is outdated in 2019, in light of the unpredictable currents of cultural change across a half century. This summary must be disregarded. Terminal Amharization of the Qemant has not occurred. A population’s self-definition as being Qemant will not fade with further Amharization. Today, after dormancy, the Qemant sociocultural system awakens, slowly experiencing a rebirth through nativistic revitalization by collective carriers of this system. Modern-day print and electronic media stoke Qemant renaissance.

Steven B. Kaplan, The Beta Israel: Falasha in Ethiopia: From Earliest Times to the Twentieth Century, 1992

Donald W. Phillipson, Relations between Southern Arabia and the Northern Horn during the last millennium ВС, Proceedings of the Seminar for Arabian Studies, 2011, 257-265

Frederick is the Emeritus Professor of Social Anthropology at the University of Massachusetts, Boston