The people did not struggle for a reformed EPRDF 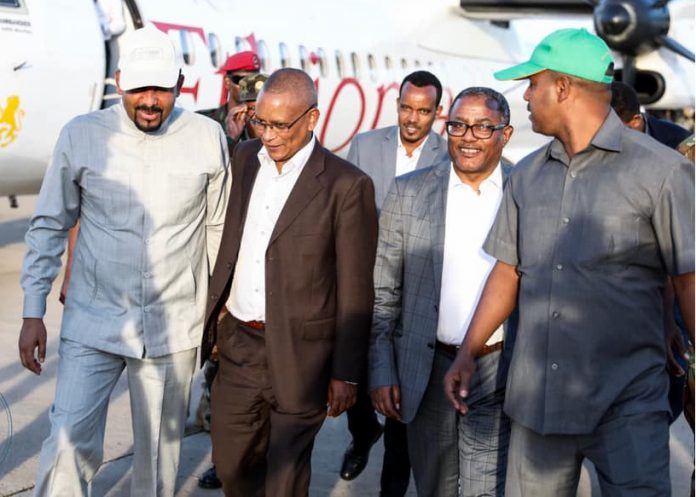 The Ethiopian people’s struggle is for the establishment of a truly democratic system of government. As such, the struggle is to see the end of rule by the Ethiopian People’s Revolutionary Democratic Front.

What happened in the ensuing months is a classic example of managed regime change. It is known that if police, security apparatus, army and senior officials think they have more to lose from revolution than from defending a regime, then even sustained mass protests can be defied and crushed, notwithstanding the cost. Remember Tiananmen Square. However, if insiders and the men with guns begin to question the wisdom of defending a regime—or can be bought off—then it implodes quickly. In other words, a regime collapses when insiders turn against it.

That was what happened in Ethiopia. A splinter group within EPRDF clearly saw the writing on the wall; that the front’s days were numbered if they didn’t do something to avert its impending downfall.

Then the group dubbed Team Lemma prevailed in intra-party elections and installed one of its own as Prime Minister. The party announced a reform agenda that included releasing all political prisoners and allowing exiles to return to struggle peacefully. This in no small way was the fruit of the pro-democracy struggle, although credit is due to Team Lemma for recognizing the reality and expediting the process, thereby sparing the country unnecessary chaos.

Optimism and euphoria for the new Prime Minister went through the roof following his speech of forgiveness, reconciliation, renewed passion for Ethiopian unity, and the slogan Medemer. The people who had been lamenting the daily erosion of the Ethiopia they know and for which their forefathers fought and died for, suddenly found in Lemma and Abiy leaders who equate Ethiopia as a life-giving “addiction”. The ecstasy of ordinary citizens was on display in the June 16 rally in Addis Ababa.

The imminent repeal of the draconian anti-terrorism law, the ushering in of press freedom, the willingness to sit and talk with all opposition parties, and the general political atmosphere in terms of people not being afraid to speak their minds, are all accomplishments that should be acknowledged and celebrated. Abiy and his administration showed political astuteness in fulfilling the legitimate demands of the populous by taking such measures, although in reality they had little choice.

Notwithstanding the promise of a democratic transition, however, the new administration has yet to put forth a coherent roadmap. The most progressive move is the excellent appointment of former opposition leader and political prisoner, Birtukan Mideksa, to lead the electoral board. But save a couple of meetings chaired by Birtukan with all political parties, no concrete steps have been taken to assure the public that work is underway. Ad hoc meetings such as the one attended by the Prime Minister and opposition leaders are not enough to address the longstanding demand of the people.

Amid all the feel-good drama, ethnic conflicts are unfolding on several fronts. The country is embroiled in crisis after crisis. As a result, in the first half of last year Ethiopia had the highest number of internally displaced people in the world, outpacing even Syria, Yemen and South Sudan.

The culprit for Ethiopia’s ills is none other than the EPRDF, which includes the newly installed administration. It was this front that imposed the language-based federal system which is the root cause of problems. The partitioning along ethnic lines led to the continuation and continued sprouting of ethno-nationalist movements, which weaken national unity, and create strife.

Today there are ethnic regions with their own paramilitary police and militias. They have become de facto semi-independent countries. There are now many ethnic groups demanding their own regions in the south, so they will also arm themselves and act as de facto nations. Unless this tendency is corrected quickly, balkanization is a risk.

Judging solely by their public pronouncements and attitude, it seems Abiy and Lemma very much want to address this burning issue. Yet, with the EPRDF establishment entrenched and TPLF, the Oromo Liberation Front, and other ethno-nationalists working to undermine everything and anything Ethiopian, they are caught between a rock and a hard place.

On the other hand, the disillusioned citizenry, perplexed, confused and overwhelmed by ethnic conflicts and the ongoing social and economic problems, have begun showing through vocal activists a hunger to punish the fallen TPLF and its allies. Finding themselves cornered, the victorious group, too, are now finding retribution against their old comrades can be a useful distraction from the economic and social problems, which didn’t disappear with the proclaimed reforms.

It is irrefutable that the top leaders of EPRDF should be held to account for all their misdeeds. Yet, the victorious group must not be allowed to oversee process of bringing to justice their comrades. That would be a mockery of justice. There is clearly a conflict of interest. How could one justify holding to account Bereket Simon but not Abadula Gemeda, for example? Such a road is a recipe for a disaster. Such matters would better be left to a legitimately elected government.

Given the current volatile situation, it is unlikely any credible election activity will take place. More importantly, there is no strong opposition political party. It is an open secret that most of the parties—particularly the returnees—are in name only.

It is under these circumstances that ODP-led EPRDF 2.0 is working, and using the state apparatus, to emerge victorious in the upcoming election, and thereby guarantee their continued rule. It is quite possible they could once again change their party and front’s name. They could even change the make-up of the coalition. The end game though is clear: The splinter group will not relinquish power.

In the interim, this group will continue to methodically ostracize the defeated EPRDF group. The TPLF seems to be fighting for its survival, and is also accused of instigating proxy violence in Qemant areas as retaliation for the Amhara claims on Welkait and Raya. While these two EPRDF groups fight it out to establish a power equilibrium, the poor disillusioned populous continues to sing the ‘Medemer’ song without realizing the struggle is hijacked.

All is not lost

Abiy and Lemma still have a golden opportunity to correct course and focus on transitioning Ethiopia to a multi-party democracy. That means they must show the fortitude to see to it that the next election will be fair and free, as if they are not competing.

They must set out in more detail the purpose and direction of the ‘reform’. This roadmap must consider two critical points.

The fundamental political issue of Ethiopia surrounding the question of what type of constitutional order is befitting the country has been a bone of contention for generations. This fundamental question, and others, must be left to the electorate, the Ethiopian people, to decide.

Abiy should see his leadership role to be that of a watchdog of the system for ordinary citizens, and as such must spend much of his energy in activities that help institute and pave the way for a transition to a liberal democratic system.

Zekarias has studied public policy, economic development, management and law. He lives and works in the U.S.