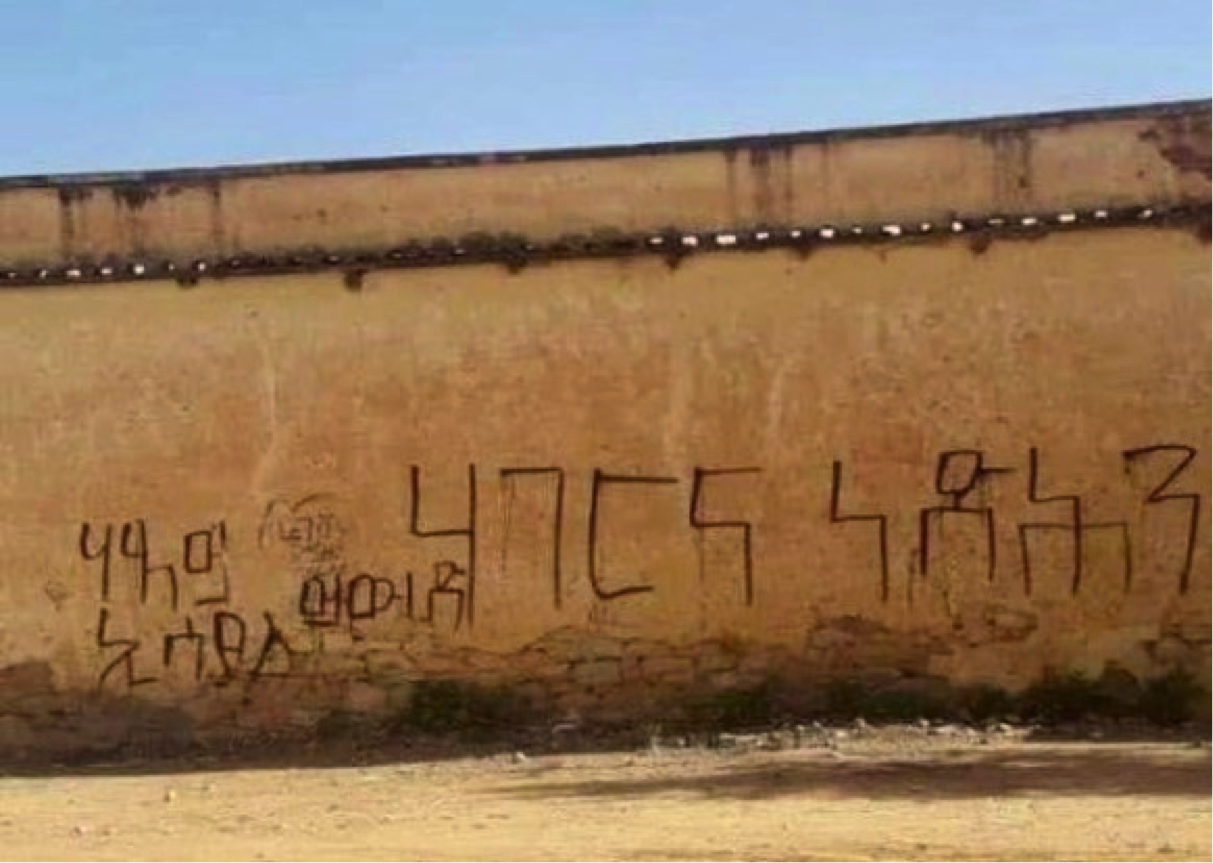 President Isaias Afewerki’s rule, once all but unchallenged, is now questioned from all quarters. Can Eritreans chart a way forward?

For more than four decades one figure has towered over Eritrean life. Isaias Afwerki has ruled Eritrea with a rod of iron, just as he once led the liberation movement that successfully liberated the country in 1991.

Previously an enormous asset, he has become the chief obstacle to progress. But his rule, once all but unchallenged, is now questioned from all quarters.

On the walls of Asmara: “Isayas step down, let’s protect our country”

Eritrean youth—many of whom having fled abroad—are no longer prepared to live in conditions of servitude, chained to a system of indefinite conscription that never ends.

Some have been in National Service for 20 years and more and rather than continue this way, they have fled abroad in record numbers. Now they have taken up the call in meetings from Canada to Belgium – Enough! Yiakl.

Their slogans now appear on the walls of Asmara: “Isayas step down, let’s protect our country.”

But removing President Isaias alone is no guarantee that Eritrea will emerge as a functioning democracy. The Arab Spring and its aftermath show how regime-change can go awry.

The events in neighboring Sudan are an indication of just how complex it can be to rid a country of a dictator, without falling into the hands of another group of autocrats.

This was the background to a two-day conference that was held in London on April 24 and 25.

Called ‘Building Democracy in Eritrea’ it heard from one of Africa’s most senior diplomats, Ambassador Haile Menkerios.

A former Eritrean ambassador and special representative of the UN Secretary General, Haile Menkerios called for a “national conference of the Eritrean people” to transform the country into a participatory democracy, saying it was the only way to avoid violence.

Eritrea has “the notoriety of being perhaps the only country in Africa that does not have a functioning constitution, a legitimate elected government, nor legitimate and functioning governance institutions that ensure accountability,” Ambassador Menkerios said in a message to the conference.

The conference was opened by Thangam Debbonaire, Member of Parliament for Bristol West, and chair of the UK All Party Parliamentary Group on Eritrea. Attendees at the ‘Building Democracy in Eritrea’ conference

For two days some 70 senior Eritrean academics and human rights activists, together with international experts who have worked on the country for many years, worked on this issue.

Some flew in from as far afield as Botswana, with contingents from the USA and a number of European countries.

Subjects from rebuilding the judicial system to reform of the economy were debated.

There were contributions from Dr Bereket Habte Selassie, who wrote Eritrea’s constitution – a constitution adopted by the National Assembly in 1997, it has still not been brought into force.

Dr Mark Ellis, director of the International Bar Association, offered his organization’s support in working on the legal system and the judiciary.

Dr Asia Abdulkadir, a gender consultant with the United Nations and chairwoman of the Network of Eritrean Women called for the inclusion of women and minority groups in every stage of the rebuilding of the country.

“We are not prepared to wait until after democracy – we must be part of the process,” she demanded.

“The objective of ‘Building Democracy in Eritrea’ is to bring together Eritreans and international supporters to begin thinking about tangible, realistic objectives for the establishment of democracy and the administration of justice in the country”, said Habte Hagos, Chairman of Eritrea Focus, which organized the event.

“The time for this is now.”

Funding for the conference came from the US National Endowment for Democracy, and private donors.

But conferences come and conferences go, with only limited impact. As one delegate observed, “there have been 52 initiatives for change in Eritrea since 1993.”

The question is how to turn the papers that were presented into working documents that genuinely help to chart the future.

This is what will now take place.

A series of working groups have been identified that will discuss a range of subjects, so that any transformation will result in the ‘softest of landings.’ There will be particular attention to diversity. “Unite, don’t harmonize” – was an appeal from the floor.

Of course, there is no guarantee of how change will come to Eritrea. There are far too many examples of change that have come sadly unstuck: Zimbabwe is a recent case in point. But unless work begins, little will be possible when the day of reckoning dawns. So leads have been identified; task allocated.

“This conference must be a process, not an end in itself,” observed Habte Hagos.

Over the next few months progress will be monitored before the next meeting is held with the aim of contributing to the emergence of a genuinely free and democratic Eritrea.

Main photo: On the walls of Asmara: “Isayas step down, let’s protect our country”

Martin Plaut is an author and journalist who specialises in the Horn of Africa and South Africa. He was the BBC Africa editor and is currently Senior Research Fellow at the University of London. His books include “Understanding Eritrea.”