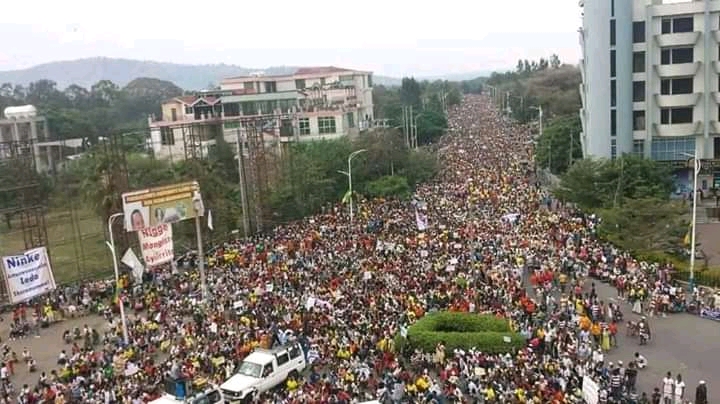 Southern Ethiopia’s largest ethnic group, the Sidama, is set to declare a new regional state on 18 July. To reduce conflict risks, the Sidama should resolve sensitive issues before forming the entity, while the government should urgently organize a constitutionally mandated referendum on the question.

Leaders of the Sidama people in southern Ethiopia have threatened to unilaterally declare their own regional state within Ethiopia’s federation on 18 July 2019. Each of the country’s ethnic groups is constitutionally entitled to a vote on forming a new state if its governing council requests one. The poll is supposed to take place within a year of the request, which in the Sidama’s case came on 18 July 2018. Yet with the deadline for the vote only two weeks away, the Ethiopian authorities have neither set a date nor started preparations. If poorly managed, Sidama statehood aspirations could fuel violence and deepen an ongoing crisis within Ethiopia’s ruling coalition. Prime Minister Abiy Ahmed and other coalition leaders should seek agreement with Sidama leaders, ideally on a later referendum date. If that proves impossible, and the Sidama declare a new state unilaterally, then their leaders should delay the state’s implementation while the parties resolve contentious issues. Deploying the army to stop the Sidama from declaring statehood, as Abiy seem ready to do, risks provoking greater bloodshed.

With little time remaining, the government has no good option. Granting the Sidama their state could trigger unrest in the restive Southern Nations Nationalities and Peoples Regional State that is home to around one fifth of Ethiopia’s more than 100 million people. A particular flashpoint is Hawassa city, now the Southern Nations regional capital, which the Sidama intend to designate as their own capital, potentially provoking opposition and triggering a fraught contest for what are currently Southern Nations’ assets. Minorities in the city and elsewhere could resist the new Sidama state. Moreover, its formation would intensify other statehood demands, particularly those of the Wolayta, the second largest ethnic group in the south. It could catalyze a violent unravelling of the Southern Nations.

Conversely, seeking to block Sidama statehood would likely lead to mass protests by Sidama that could also turn lethal. The Sidama are in no mood to accept further delays to forming a state for which they have long campaigned. Their quest has gathered momentum that will be hard to stop. Sidama activists from the Ejjetto (“hero”, in the Sidama language) movement that has spearheaded the campaign say failing to hold the vote on time would breach their constitutional rights and justify self-declaration. The Ethiopian constitution and electoral laws make no provision for what happens if a statehood referendum does not take place within a year of its request, beyond that the upper house of parliament should resolve any dispute.

The Southern Nations upheaval comes at a difficult time for the country. Since assuming office, Prime Minister Abiy has embarked upon important reforms but contended with burgeoning inter-ethnic violence, which has killed thousands and displaced millions in the past two years. The Ethiopian Peoples’ Revolutionary Democratic Front (EPRDF), the ruling coalition which comprises four regional parties, is fraying. The EPRDF party that governs Southern Nations has lost most of its authority. The EPRDF parties representing Ethiopia’s two large ethnic groups, the Amhara and Oromia, are squeezed by ascendant ethno-nationalist movements within their own regions and, in response, have adopted harder-line positions in power sharing and territorial disputes. The killings of five top officials, including the military chief of staff, on 22 June, both reflected the EPRDF’s internal crisis and threaten to aggravate it. The EPRDF has proved incapable of responding effectively to the brewing crisis in Southern Nations, while national security concerns have hardened the mood in the capital Addis Ababa.

It is imperative that Prime Minister Abiy and federal authorities hold immediate talks with Sidama leaders. Deploying the security forces in a bid to prevent the Sidama from self-declaring may prove costly. It could leave Ethiopian troops policing mass Sidama protests that turn violent, pitting protesters against security forces and Sidama against other ethnicities. Instead, Prime Minister Abiy should seek an agreement with Sidama leaders that ideally entails a date for a referendum as early as operationally feasible, and, assuming that voters in that plebiscite endorse the proposal, a timeline for that state’s formation. For their part, Sidama leaders should accept such a compromise, which would hew closely to the constitution and would carry the smallest risk of conflict.

If it proves impossible to reach such an agreement and Sidama leaders move toward declaring their own state on 18 July, they should at a minimum agree to delay its formation to give themselves time to resolve contentious issues related to the new state. Particularly important is to soon reach agreement among federal and regional authorities, Sidama leaders and other Southern Nations ethnic groups’ leaders on plans for Hawassa, a fair division of regional assets and the relocation of the Southern Nations capital. The government also must manage other statehood aspirations that the Sidama’s new state will likely fuel. Prime Minister Abiy and other senior officials should build on a regional government study to negotiate with other groups on arrangements for a possible new configuration of multi-ethnic southern states formed from the rump Southern Nations. International partners and the federal government could offer increased budgetary support to help fund the new states and offset losses from the inclusion of relatively prosperous Hawassa within the new Sidama state.

May 5, Sidama declares state of impatience

The International Crisis Group is an independent organisation working to prevent wars and shape policies that will build a more peaceful world.