Why Orthodox Christians in Ethiopia feel under attack 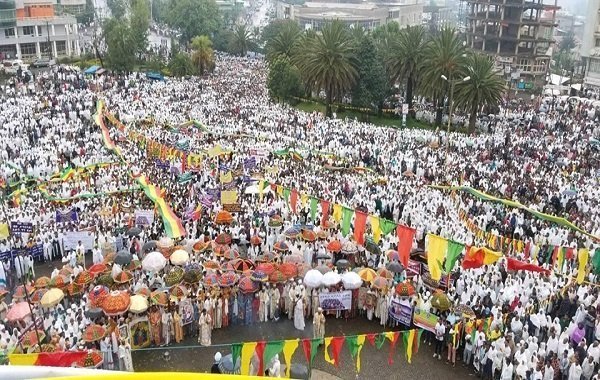 When two men were shot dead by police on the night of 5 February in downtown Addis Ababa amidst confrontations triggered by the construction of a church that the authorities claimed was without proper permits, many Orthodox Christians in Ethiopia saw the incident as a continuation of a growing number of attacks against their religion over the past two years.

The episode saw government officials trying to demolish the foundations of a church in the middle of the night. They were met with resistance from the faithful; tear gas and live bullets were fired in clashes that continued for hours. In addition to two deaths, numerous others sustained injuries.

Over subsequent days, people took to social media in an outpouring of anger that at first seemed temporary.  But reports indicating that the plot of land in question had been given to an influential evangelical preacher with close ties to the Prime Minister contributed to continued  frustration.  During services in churches across Ethiopia’s bustling capital, a sentiment of being ‘under siege’ continued to be demonstrated by clerics and worshippers alike. A series of sermons titled “Wake Up Call” in which the attacks are often remembered have become increasingly popular.

These sentiments, of concern and frustration, were visible earlier. In September 2019 tens of thousands of followers of the church took to the streets in more than a dozen towns and cities denouncing attacks against the faithful as well as against churches in a number of places across the country. It took only a few weeks for violence to resurface. In late October, church leaders said more than sixty individuals belonging to the Orthodox religion were killed during a bout of clashes prompted when authorities allegedly tried to remove bodyguards of a prominent activist turned politician, Jawar Mohammed.

Since Prime Minister Abiy Ahmed came to power in early 2018, Ethiopia has seen growing ethnic and religious conflicts with different religious institutions including mosques and Pentecostal places of worship attacked. But many belonging to the country’s largest faith group, the Ethiopian Orthodox Church, believe they are particularly embattled.

For hundreds of years, the Ethiopian Orthodox Church held sway over a succession of imperial regimes that reigned over the East African country—an influence that inevitably translated into liturgical and cultural hegemony.

In the mid-1970s, a Marxist junta overthrew Ethiopia’s last emperor, Haile Selassie I, effectively putting an end to the symbiotic marriage between the church and the state. And with that, no longer were leaders required to carve their legitimacy from the church’s blessing, meaning the church could no longer rely on the state’s preferential treatment for expansion and consolidation.

Governments that ruled the country in the following decades habitually equated the church with an unjust bygone era, but ordinary congregants nonetheless continued practicing their faith with no particular hindrance even during 17 years of a Marxist regime that was by definition anti-religion.

Followers of the Orthodox Church account for nearly half of Ethiopia’s population estimated currently to be above 110 million, making it the largest of the six Oriental Orthodox churches. This higher percentage of the population meant a higher degree of representation in government bureaucracies, which might have helped the average adherents to practice their faith in relative ease.

But there were complaints and concerns. A key one was that the authorities, especially since the late Meles Zenawi took power in the early 1990s, co-opted the church’s top leadership and facilitated the appointment of figures who were subservient to the political elite. The church’s synod split in two in the early years of Meles’ premiership with one patriarch at home and an opponent in exile.

When Abiy consolidated a new period of political and economic reforms, Orthodox Christians, like a large portion of the population, had a lot to celebrate and to hope for. The premier personally arbitrated a reconciliation between the divided synod and during his first visit to the U.S. he met and returned with a former head of the church who had been expelled from the country in 1991.

The result was that Abiy’s image adorned Orthodox celebrations; it did not seem to matter for the faithful that he had been outspoken about his Pentecostalism, a rival faith group that’s been rapidly growing in Ethiopia, largely at the expense of the Orthodox Church.

But that love affair hasn’t lasted; many Orthodox Christians now seem to have a different view of the Prime Minister. During his two years in office, attacks against the church have increased to an unprecedented degree. In areas where Orthodox Christians are a minority, followers have been killed and churches burned down with no or little protection offered from the government.

In August 2018, a senior church official told the BBC that in the city of Jigjiga, in the eastern part of the country, seven priests were killed. Six months later two other churches were attacked in the same area during violence that left twelve dead.  A number of other attacks happened in Oromia. Other religions’ buildings were also attacked in outbreaks of violence. For example, one most prominent case was the burning of four mosques in Mota town in Amhara region.

But despite such incidents, many Orthodox Christians feel they are particularly under threat, and they are also concerned that they lack political representation to highlight their plight. When Abiy rebranded and restructured the coalition that ruled Ethiopia for nearly three decades as the Prosperity Party, some people noted that none of the seven founding signatory parties had a leader from the country’s biggest religion.

Another point of frustration is a budding movement within the church itself in which some ethnic Oromo clerics are demanding a higher degree of autonomy. Some see the movement as politically motivated, aimed at weakening the church. The movement’s leaders have sometimes joined political rallies and are often seen with non-Orthodox politicians, making some of the faithful even more suspicious.

Ethiopia is a religious country where, according to a survey by Pew Research Center, 98 per cent of the Orthodox Christian population say their faith is very important in their life. As it’s heading to an election that is supposed to be the first democratic one in decades this August, Prime Minister Abiy’s party might need to work harder to win the votes of the country’s Orthodox Christians.

19 Jun 2019 The bastardization of Ethiopia’s modernity

Tarrik is a writer and researcher based in Addis Ababa who is interested in religion, culture, and politics.