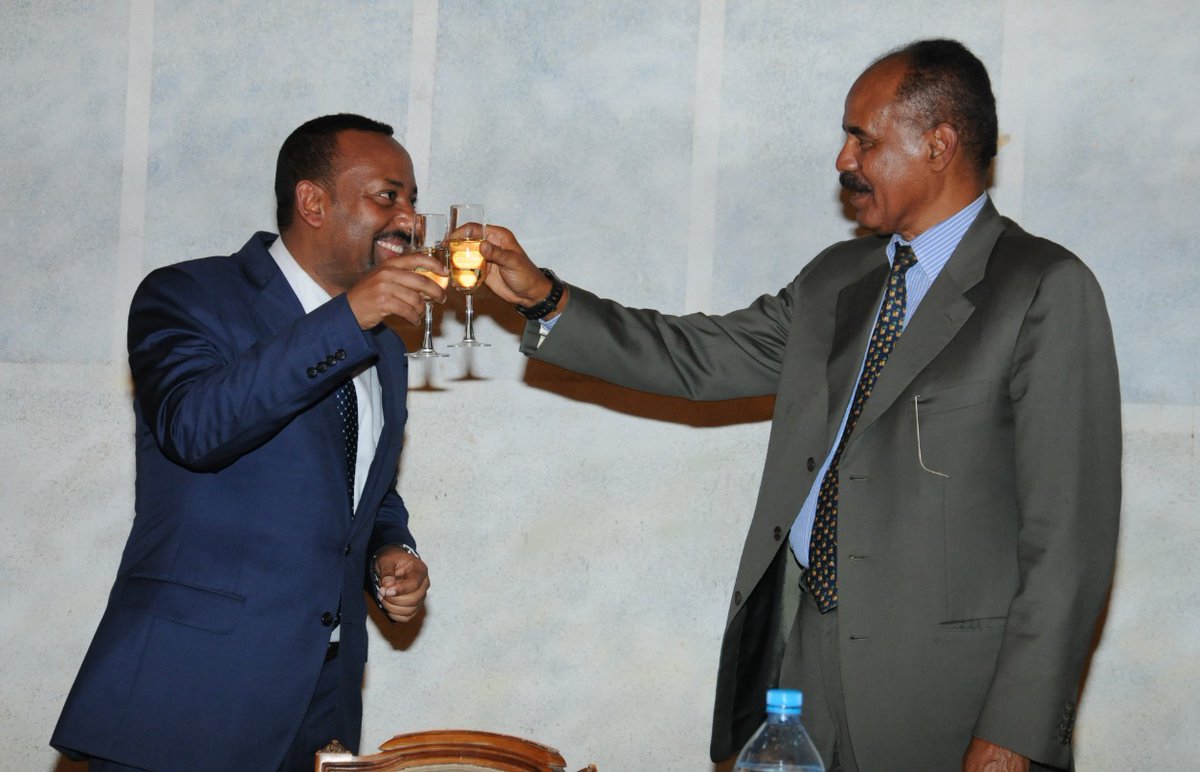 Last month there was a grand celebration in Tigray, the northernmost region of Ethiopia, on the occasion of the 45th anniversary of the founding of the Tigray People’s Liberation Front (TPLF), the rebel movement that assumed state power in 1991. But this was no regular celebration. It took place at a time when the TPLF has been ousted from the pinnacle of that power by reforms it claimed it initiated but were then snatched away.

Even during its rebellion, the TPLF never felt as threatened as it does now in Ethiopia by forces it labels “parasitic”. In the last two years, it saw a coalition it built and controlled for over three decades crumble before its eyes. However, the main threat to the TPLF does not come only from this domestic trauma. In fact, its greater cause concern is its northern neighbor, Eritrea.

The Red Sea state of Eritrea was an Italian colony from 1888-1942. After Britain, a victor in World War II, ruled for another decade, it was federated with Ethiopia by the decision of a United Nations Mandate in 1952. Another ten years on, the leader of Ethiopia, Emperor Haile Selassie I, annexed it, an action many believe catalyzed Eritrea’s 30-year guerilla struggle for independence.

The now-President of Eritrea, Isaias Afwerki, who led the Eritrean People’s Liberation Front (EPLF) rebellion, and TPLF created a sometimes-fractious tactical alliance in the 1980s to overthrow the Marxist military regime of Mengistu Hailemariam, which they succeeded in doing in 1991. Their relationship, however, started to sour, primarily over economic issues, only a few years after Eritrea seceded from Ethiopia and TPLF settled in Addis Ababa. This eventually resulted in the disastrous conflict from 1998-2000. Those who analyzed the cause of that war tend to agree that the personality and political vision of President Isaias had a lot to do with the descent into war.

Though Isaias fought for Eritrean nationhood, he often expressed his disdain for independence movements other than the one he led. In an interview conducted in 1990 by American historian and researcher Paul Henze, former Ethiopian Prime Minister Meles Zenawi, an ally of Eritrea at the time, hinted at Isaias’ dilemma even over Eritrea’s independence. According to Henze, “…Meles judges the attitude of the [Eritrean] population to be so negative that it constitutes a problem for EPLF leadership. Isaias Afwerki, he believes, understands the problems of a unilateral declaration of independence. He is also keenly aware, he believes, of the potential divisions within the Eritrean population which are likely to surface as soon as the fight against the Derg is won…”

These views of Isaias have surfaced over the years. Most recently, during his interview with Eritrea’s state broadcaster, he opined “South Sudan should not have declared independence”. It is this political vision that put him on a collision course with TPLF, among many other reasons. This is because TPLF has a long-held belief that ethnicities should have a right to secede, and it went as far as embedding that concept in Ethiopian constitution, following the Soviet Union model, although arguably with a similarly questionable level of commitment to accepting secessionism in practice. In several interviews, Isaias has said that he advised TPLF against legalising secession.

After 1998, Isaias hosted a plethora of insurgents in Eritrea that fought the Ethiopian government led by a ruling front whose core was TPLF. Prominent among them were groups bitterly opposed to the federal constitution that allows, in theory, for ethnic groups to secede, if they choose to, and also grants them the right to pursue a higher grade of administrative status within the federation.

Rather than being concerned about self-determination rights for substate nationalists, Eritrean observers believe that Isaias has a grand vision of uniting the region, envisioning himself at the Horn’s helm. And he also believes that the biggest obstacle to the realisation of this vision is TPLF. Hence, the irreconcilable enmity.

Does Ethiopia really need another Tewodros II?
Our failure to properly deal with the crisis of the Era of Princes continues to haunt us.

In 2018, it seems that Isaias felt he had found a partner to implement his ‘vision’ in the newly minted Ethiopian Prime Minister Abiy Ahmed. One of the insurgent groups he hosted, and many believe aligns with his regional vision, is Ginbot 7. This organisation was among the first to embrace Abiy. In fact, Andargachew Tsige, one of its top leaders, has said he was the one who convinced Isaias that Abiy is a person to be trusted.

Since, Ginbot 7, and similar groups that are enemies of TPLF, have become cozy with Abiy’s government. Such alliances, however, only heightened TPLF suspicion and its feeling of encirclement, and have contributed to a rise in Tigrayan solidarity that has benefited the otherwise embattled ruling party.

Following the shallow 2018 Ethiopia-Eritrea deal that earned Abiy a Nobel Peace Prize, Isaias made TPLF a target of political attacks accompanied by vitriolic rhetoric. As the months went by, the attacks got bolder.  It may seem strange for a national leader to target a political party of a neighbouring country that is not in power, and it is alarming for TPLF that Abiy and allies have given tacit approval and at times encouragement of these attacks. But, to a keen observer of Ethiopian and Eritrean politics, there is nothing particularly surprising about the developments.

Tigray and a large chunk of Eritrea share the same ethnicity, culture, language, historical background, familial ties and psychological makeup. With such close relations spawned over centuries, it is inevitable that the social and political paths of the two people cross, whether they live under one or two states. Couple that with Isaias’ bitter history with the TPLF, tendency to personalize politics, and his grandiose regional ambitions, and you can see this coming.

Ethiopia and Eritrea's peace must be rooted in past
Historical grievances between the two societies are a barrier to healthy bilateral ties.

What is different this time is Abiy and his allies’ eagerness to exploit the division between TPLF and Isaias to achieve their own goal of neutralizing their domestic adversary, TPLF. It appears that ensuring TPLF’s submission is worth a huge gamble for Abiy. Normally, a leader who obsessively tries to curate his public image would not risk such a close association with a brutal autocrat like Isaias, who heads a regime whose officials are accused by UN investigators of selling the kidneys of their own fleeing citizens.

But, rather than distancing himself, Abiy has literally embraced the dictator. In comparison to the normal diplomatic protocol, it is embarrassingly affectionate. According to Eritrean observers, the bizarre behavior is explained by Isaias’ determination to exact revenge against TPLF for defeating and isolating Eritrea and to realize his long-held political vision for the horn of Africa—and Abiy’s apparent support for these goals.

Ephrem Aferom, an Eritrean research fellow at Mary Washington University in Fredericksburg, in Virginia says “..Isaias Afwerki has never lived without conflict, scheme and conspiracy in his entire adult life. A sustainable peace cannot be forged with such an individual addicted to chaos. The ‘peace’ between Eritrea and Ethiopia was supposed to bring change, particularly to the Eritrean people. Indeed, Isaias may have realized eventually it may, whether he likes it or not. Therefore, he chose to create enmity with Tigray to continue with the status quo and to satisfy his addiction to chaos…”

Another Eritrean activist and political analyst, Saleh Younis, believes that  “The Eritrea – Ethiopia peace agreement was a “get out of jail” card for Isaias Afwerki who had narrowly evaded a referral to the ICC for committing Crimes Against Humanity. It is a peace with no peace dividend for Eritreans. Before the peace treaty, Eritreans could at least console themselves by saying at least the international community is aware of our plight. No more. The world so wants Abiy to succeed they are indulging his blind spots, including Isaias Afwerki. But given the nature of Isaias, that is temporary: only a matter of time before he reminds them why they hate him….”

Is Tigray really a drop in the bucket for Abiy's administration?
Tigrayans are wondering why the Prime Minister took a sharp turn against their region.

In his last interview with Eritrea’s state media, Eri TV, Isaias said that he would not sit with his hands folded when it comes to Ethiopian affairs. Again, it is rare to hear a leader of a nation that is barely thirty-years-old with less than a population of five million talk about a nation twenty times larger in such a manner. But, this is Isaias. He has shown a similar tendency in the past by destabilizing neighboring countries: Djibouti, Somalia, Sudan, and Yemen.

That is a major reason why TPLF is wary of his threat. Therefore, its response was swift. In a speech to mark the 45th anniversary of the founding of the party,  the region’s head Debretsion Gebremichael called on “..Ethiopian parliamentarians to condemn the threat that their fellow citizens are confronting or they might as well declare Tigray is not part of Ethiopia, since they chose to be silent, when a foreign leader threatens it..”  That was also a thinly veiled jab at Abiy for ‘bromancing’ with a man who is threatening part of the country he leads.

Debretsion also called on members of the Eritrean army to defect: “…should they choose to come to Tigray, they will be welcomed…” Such a call seems intended to strike at Isaias’ Achilles Heel: the Eritrean army is filled with young conscripts who are well-known for fleeing from his grip to as far away as across the Mediterranean. They need very little encouragement to continue what they have been doing for years and so leave the army even more weak and vulnerable.

Should such tit-for-tat between TPLF and Isaias continue, we may be in for another devastating cycle of conflict, or even possibly the disintegration of Ethiopia. Nobel Peace Prize or not, Abiy’s inability to correctly choose between protecting a region of his own country or cuddling a newfound foreign friend, known the world over for his cruelty against his own people, may cost him dearly.

17 Jan 2019 Is Tigray really a drop in the bucket for Abiy’s administration?

Naty lives and works in Alexandria, Virginia and is a keen follower of Ethiopian and Eritrean affairs. Follow him on Twitter @natberh