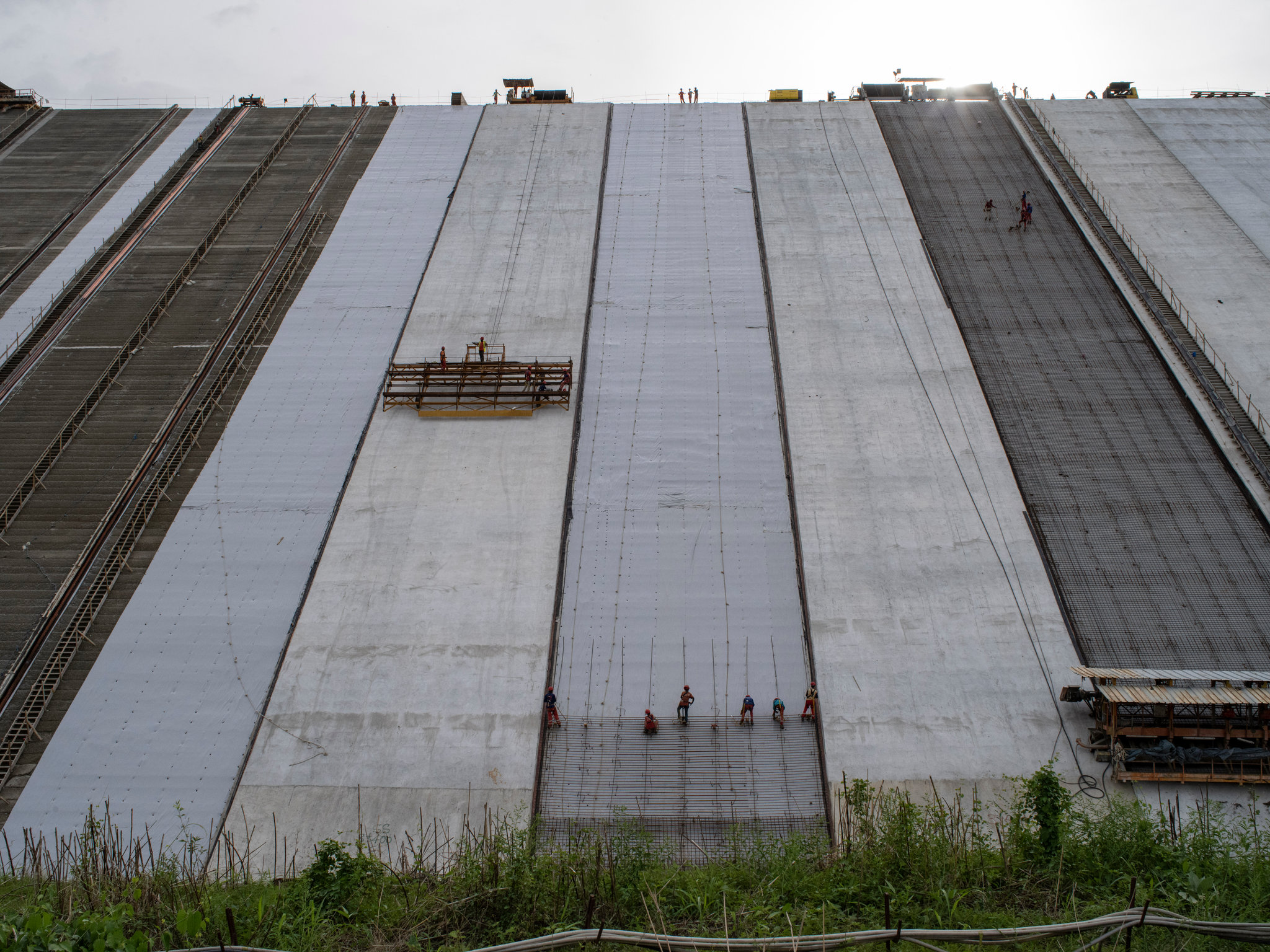 On 28 February, the U.S. Treasury produced a statement that displayed its lopsided assessment of the Nile dispute between Ethiopia and Egypt.

While the U.S. lauded Egypt for accepting its agreement, it overstepped the mark by warning Ethiopia, a sovereign country, that “final testing and filling should not take place without an agreement.”

Unsurprisingly, Ethiopia has not yet accepted the deal, and neither, for that matter, has Sudan.

On a number of occasions in recent years it has been reported that the Trump Administration and the State Department have been at odds. Perhaps as a result, besides the constitutionally granted instances where the Treasury takes the lead on foreign affairs, such as engaging with the World Bank and the International Monetary Fund, the State Department is being marginalized on matters within its mandate and where it has expertise.

Under Trump, the Treasury has played a role in strong-arming a pro-liberalization agenda in Ethiopia, again side-lining the State Department. This ambition has been made clear once more in recent weeks: the U.S. announced it would back Ethiopian reforms by trying to facilitate what is hoped to be private investment of as much as $5 billion. Trump’s pick of Steven Mnuchin, the Treasury Secretary, to lead negotiations on the Grand Ethiopian Renaissance Dam (GERD), is part of this trend.

The other international observer-turned-mediator, the World Bank, has been similarly partial. Indeed, its stance has been evident for a while as it has consistently failed to furnish funding for Ethiopian Blue Nile projects—part of efforts to lift over 100 million people out of poverty—claiming it required downstream Egypt’s approval to green light projects a on transboundary river. In the latest expression of these unfair stances, Egypt is capitalizing on this moment to try and pressure Ethiopia into signing an agreement that potentially curtails its rights to use the Blue Nile’s water for its development.

Altogether, it is clear why Egypt favors the involvement of the U.S., World Bank and Middle Eastern allies over resolving the matter bilaterally or regionally, and why many Ethiopians were concerned about the government’s decision to join the U.S.-World Bank-led negotiations. The tendency for Egypt to take the Nile issue to Gulf allies or Western superpowers is not new. Gamal Abdel Nasir, Anwar Sadat and Hosni Mubarak all put the Nile dispute on the agenda of the Arab community, ignoring pleas from other riparian states to resolve it among African riparian states.

It appears that Egypt entered the latest phase of the negotiations with the assumption that Ethiopia is weakened by internal divisions and that its current leadership lacks ideological and policy clarity. Moreover, Cairo is consumed by the notion that the GERD is on the verge of becoming a reality. With time against them, it has found strength in its allyship with the U.S.; President Trump has even called his Egyptian counterpart “my favorite dictator”.

These efforts are in contrast to Ethiopia’s. Since 2001, the Ethiopian government tried to make progress through the African-led approach of the Cooperative Framework Agreement. This generated a good deal of support for Ethiopia’s right to use the Nile’s waters and abrogate treaties to which it was not a party. Above all, it safeguarded the interests of the rest of the basin countries and expanded the agenda beyond Ethiopia and Egypt.

But Egyptian leaders prefer to abide by unfair colonial treaties. This marked difference between the two approaches that manifests time and again. More than a century ago, Ethiopia outright rejected the colonial invasion of Italy, becoming the first African nation to ever defeat a European power. It has similarly rejected foreign interference in its Nile policy ever since.

GERD Insight: U.S. must reset its navigation of Nile file
Understanding the context will enable observers to recognize the unfairness of the status quo, writes a former Ethiopian diplomat.

The U.S.’s recent missteps may in part be explained by President Trump’s belief he deserved a Nobel Peace Prize for his dealing with North Korea. He also seemed to suggest that Ethiopia’s rapprochement with Eritrea, or perhaps Ethiopia’s change of leadership, was an outcome of his own efforts, and so part of the endless list of wins he had promised the American people. Trump want to prove he is the real deal, so to speak.

But far from being a diplomatic victory, U.S. interference in the Nile dispute is ill-advised. First, it negatively affects the U.S. position in the Horn, a region troubled by intractable conflicts, terrorist groups, and state failure. Since 9/11, the U.S.’s partnership with Ethiopia has been crucial in its fight against terrorism and state fragility; and it is that alliance the U.S. now risks undermining.

Second, while Ethiopia is an ally to the U.S., it is also a strong partner of China, maintains good ties with Russia, has promising links with Gulf countries, and a strong relationship with Israel. In other words, Ethiopia is well placed to work with various actors, and is not beholden to the U.S. That is a testament to the Ethiopian state’s long-standing neutral and pragmatic diplomatic approach and the consequent constructive relations it enjoys with much of the rest of the world.

To start making amends, the Treasury should step back from leading the diplomatic effort to resolve the Nile dispute, let alone intervening to defend Egyptian interests. The former U.S. ambassador to Ethiopia, David Shinn, expressed his surprise at the Treasury’s role; and prominent U.S. civil rights activist, Jesse Jackson, expressed his fear that Ethiopia could become a 21st century colony of Egypt.

The misguided approach may be result of internal divisions within the Trump administration, with institutional jurisdictional squabbling impacting U.S. policy on the Nile. Trump’s choice of the Treasury might also indicate he was planning to lure Ethiopia into submission with huge financial compensation if it concedes in its negotiation on the Nile.

GERD Insight: Sink or swim: unlocking the Nile impasse
The only way to solve the disagreement between upstream Ethiopia and downstream Egypt is by abrogating and replacing obsolete and unjust treaties.

Regardless, the debacle reflects an unstable global order overseen by an unpredictable superpower with waning moral and legal authority. It also demonstrates the current U.S. administration’s lack of coherent policy and strategy in Africa and makes its competence questionable. Still, some U.S. political actors are aware of the harm being done to the superpower’s reputation and interests, and more officials on both sides of the isle need to condemn the actions that have harmed historically strong relations with Ethiopia.

Becoming the seat of the African Union’s headquarters and that of other international organizations did not happen by chance. It reflected the symbolic importance of Ethiopia’s independence in the face of colonialism, and its role in ascertaining the vision for continental unity and prosperity. The Trump administration should consider the weight of such a legacy, as it has with Egypt’s role in the Middle East and the Israel-Palestine conflict.

Moreover, Trump might be aiming to counter the perceived growing threat of Iran on the U.S.’s larger foreign policy agenda by favoring Egypt in the Nile dispute and so boosting regional support for Washington’s stance. Similarly, it can be argued that Egypt’s strategy of putting the Nile issue on the Middle Eastern agenda, to the point of raising it as relevant to the Israel-Palestine peace process, can be understood as a way of generating support for its position on the Nile. So long as Egypt persists with this unfair modus operandi, it and all states that take its side in the Nile dispute will harm their own interests in the long run.

GERD Insight: Flexibility must be foremost in GERD treaty
It's time for Egypt, Sudan and Ethiopia to set aside narrow national interests and address climate change by building flexibility into the forthcoming GERD treaty.

The U.S. could switch track and instead play a constructive role by allowing the international community, African Union (AU) and United Nations to help resolve the problem. Meanwhile, the Ethiopian government needs to seek national consensus and solidarity on the issue of the Nile, a matter of seismic importance. More specifically, it has to empower the GERD council and civic leaders to prepare a national position statement that outlines Ethiopia’s policy, strategy and expectations from future negotiations.

This should include elaborating on Ethiopia’s commitment to sharing the waters with the rest of the upper stream and downstream countries Practically, this effort will be facilitated by focusing on operationalizing the Cooperative Framework Agreement through diplomatic efforts within the continent. Meanwhile, Egyptian and Nile-related media should be monitored closely to help the Ethiopian government anticipate its counterpart’s actions.

External actors need to play their role in ensuring fair play, so that the issue is settled in the least volatile way. The Ethiopian government should push for the involvement of neutral state or non-state actors to assume this critical role. At the negotiating table, Ethiopia needs to be more assertive in demanding that Egypt utilizes the Nile waters in a sustainable and environmentally friendly manner, given their hitherto indulgent consumption of this precious resource.

The AU and other regional bodies can be explored as the best platforms for a mutually beneficial outcome to the Nile dispute. Otherwise, becoming an autonomous continent that functions under the umbrella of the AU remains a distant prospect. Similarly, it would also be a failure of the international community to let this regional crisis loom any longer over the fractured global political landscape.

25 Jan 2020 Flexibility must be foremost in GERD treaty

Zerihun studies Public Policy Administration and Law at York University, Toronto, Canada. He completed his Master’s in International Relations in Kyoto, Japan. He is a policy analyst and freelancer and can be reached at zerihunaddisu1@gmail.com