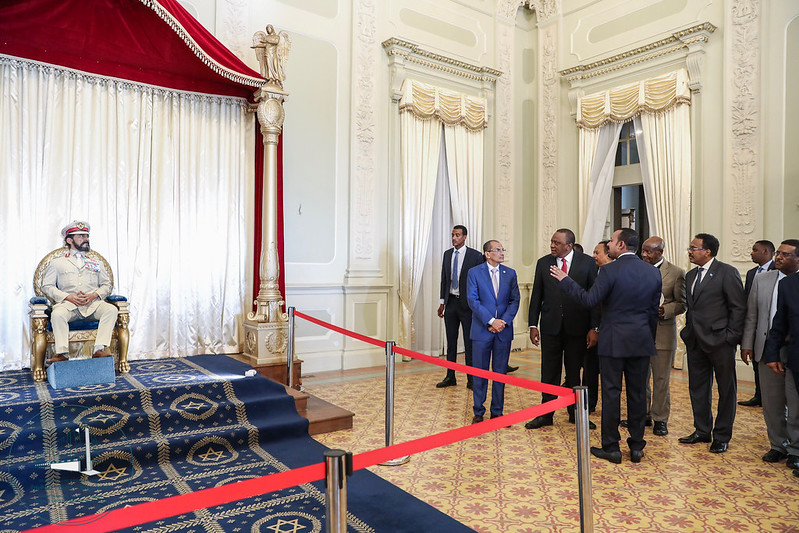 The premier believes the power of positive thinking can help him save Ethiopia.

Who is Abiy Ahmed, the man who has been Prime Minister of Ethiopia since 2018? In Addis Ababa, the question is often met with awkward silence. Yet the answer is vital to any deeper understanding of the present crisis in Ethiopia, and particularly of a war between the federal government and the Tigrayan authorities, which threatens to lay waste to the country and destabilize the Horn of Africa.

The mainstream interpretation is that the crisis is rooted in a struggle about whether power should lie at the center in Addis Ababa or be distributed among the capitals of the ten regional states.  In other words, should Ethiopia be a centralized federation of regions largely defined by geographical boundaries, or a looser confederation of national ethnic entities? Oligarchic interests are also at stake: in Ethiopia, positions in the party-state and personal enrichment—legal or illegal—are inseparable.

But the crisis is not purely of the here and now.

The Ethiopian empire was built in the second half of the 19th century. Its homeland was the northern highlands, its ‘colonies’ all around. Problems arising from this legacy have never been completely resolved, and it is still unclear what kind of state should be constructed on the remains of this empire that is capable of achieving legitimacy among its citizens.

These are issues that cut across the whole of Ethiopia. They have now escalated into a war between the champions of the two rival visions: Abiy for the ‘centrists’ and the Tigray People’s Liberation Front (TPLF) for the ethnic ‘confederalists’. However, from the two, Abiy’s personal stance has had a disproportionate impact.

None of the foreign officials who have met the premier, none of the Ethiopian academics, researchers, experts, or politicians who have worked closely with him or spoken with him at length, have agreed to speak on the record, for fear of reprisals except one. But, privately, these outsiders are almost unanimous. First, they say, Abiy lacks political and historical knowledge. But the remote origins of the crisis in Ethiopia stem from opposing narratives around the country’s imperial history.

More precisely, his speeches and positioning suggest a stereotypical conception of history, rather than a sound and thorough knowledge. Second, they note that his fundamentalist Pentecostalist faith is not a private matter. He belongs to the Mulu Wongel (Full Gospel) Believers Movement, which claims 4.5 million Ethiopian members. According to almost all the interviewees, his faith dictates his political vision and actions. A few among the Ethiopian interviewees believe that he brazenly exploits this faith to reinforce his legitimacy.  They agree with a diaspora analyst who argues that “Abiy has deliberately crafted a deceptive ethos as a persuasive tool”.

Whichever is true, the outcome is the same.

Abiy believes that after Ethiopia teetered on the edge of the abyss two or three years ago, when outbreaks of violent unrest threatened the country with disintegration, the only path to salvation is a kind of moral revolution. Medemer, the concept forged by Abiy, translates roughly as “combining and uniting”.

The country will transcend its divisions, mainly ethnic in nature, by gradually coming together around a common set of moral or ethical values: love, forgiveness, reconciliation, etc. Ethiopia first and foremost needs a spiritual revolution, a change of mindset. This, he argues to his entourage, will bring not just peace and harmony, but prosperity.

It is therefore no accident that he chose the name Prosperity Party for the non-ethnic structure he created on the ruins of the former ruling coalition—made up of representatives from the four most powerful regions—which held power for 27 years. The credo of the Prosperity Gospel is that the stronger the belief, the more God will reward the believer with financial blessings. Wealth is a gift from the Almighty to those who deserve it.

There is therefore no contradiction between the strict morality of believers and Abiy’s practice of attracting supporters with gifts and positions. Merera Gudina, chairman of the opposition party Oromo Federalist Congress describes this as the “commercialization of politics”. The researcher Alex de Waal calls this framework a “political marketplace…in the form of exchange of political loyalty or cooperation for payment”.

Individuals, therefore, are at the heart of his political vision. Realities are relative, or must be concealed, as with the total media blackout on the war. He even seems to embrace the concept of ‘alternative facts’, claiming for example, that not a single civilian was killed during the seizures of Tigray’s cities, or that the majority of the refugees in Sudan are young men, despite UN refugee agency reports that most are “women and children”.

Finally, Abiy’s politics are rooted in neither established structures, historical precedent, nor institutions: “Because the truth is with us, no one will stop us… Because we work holding on to the truth, the God of Ethiopia will assist us”. According to the sources interviewed, he believes himself chosen by God as the only man who can save Ethiopia, and that provided that his will is divinely-guided, he will win.

Ethiopia’s recent history has been turbulent.

In 1974, Emperor Haile Selassie, the “conquering lion of the tribe of Judah” and “elect of God”, was deposed by a Soviet-oriented military junta. There followed a long insurgency, led by a mainly Tigrayan armed force, which overthrew the junta in 1991. Once in power, the new government—which had its ideological roots in the Albanian version of Marxism-Leninism—headed a system built around and “democratic centralism” and, latterly, the “developmental state”.

The end of this 44-year ‘materialist’ interregnum was in keeping with the fundamental religiosity of the Ethiopian people. Abiy has embraced it, either by conviction and/or to assert his popularity. He describes Ethiopia as “a nation of the Creator’s cardinal wisdom”. Ethiopians largely hold to an age-old millenarianism, the belief in a prophet who will come to save the country, and Abiy has duly acquired the title of “messiah”. In the words of one adherent, Abiy “wants the soul of our nation to rise and shine once again”, a soul which “has been buried for more than 44 years, damaged and darkened… with evil intent and design”.

Abiy Ahmed—a Philosopher King or a Sophist?
By Getu Teressa

For the subjugated peripheral populations, however, this vision is more often perceived as an attempt to return them to a former position of subordination, of assimilation into Abyssinian civilization, a prospect that they fiercely opposed and oppose. The clash between the TPLF and Abiy is therefore not only the expression of two opposing visions and objectives for Ethiopia. It is also a reflection of two approaches, one secular, the other religious, which are irreconcilable.

Abiy recently confessed privately to a foreign official: “My people don’t understand me”. While his popularity has surged among the Amhara after the victory in the conventional war in Tigray, nationally his star is waning. The so-called “law-enforcement operation” in Tigray has taken an ethnic turn, with Amhara police and militia engaging Tigrayan forces and claiming territory. These events conceal a second front, even more perilous in the longer term: the armed civil resistance in parts of Oromia, home to more than a third of the country’s population.

The economy, particularly foreign investment, is in decline rather than showing the promised improvement. A cleansing of Tigrayans has begun in the administration, and in public and even private companies, with the potential to trigger an infernal and self-sustaining cycle. Because his medemer ideology has not percolated downwards, Abiy has reverted to more or less the same heavy-handed methods and disastrous divisive tactics that he won power by opposing. The main opposition figures are in jail, journalists and even some academics are intimidated, sometimes imprisoned.

For onlookers on all sides, domestic and external, even among leaders in the Horn of Africa, the specter that now raises its head is of ethnic slaughter at a scale even more terrible than in former Yugoslavia. They are pleading tirelessly for an “inclusive national dialogue” as the only way to prevent such an outcome. Abiy has systematically refused, either because he sincerely believes he is a messiah, the only one who can “‘Pentecostalize’ Ethiopian politics”, as described by anthropologist Dereje Feyissa, or simply out of a thirst for power.