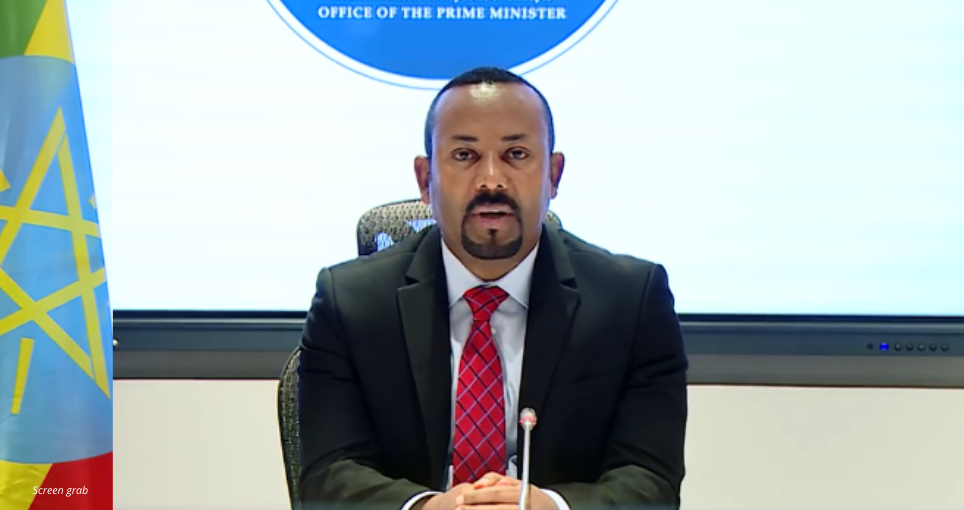 After unilaterally deciding that Prosperity Party will govern until elections, the type of ruling system the Nobel laureate yearns for becomes clearer and clearer

History may show that last week was a decisive moment in the post-EPRDF era. Albeit a clear sign that Prime Minister Abiy Ahmed is heading in the wrong direction.

As if the four options were still on the table, Abiy then “consulted” opposition leaders about them on 29 and 30 April. He told his social media followers the meeting was “fruitful”, but on the occasion he also attacked the Oromo Liberation Front (OLF) and Tigray People’s Liberation Front (TPLF).

To the first, as one its former militant wing is engaged in an armed struggle in Wellega, he said: “You cannot stand on the peaceful and legal struggle and armed activity”. For the second: “practice democracy on your turf. You cannot repress in Tigray and demand a free and open forum in the Federal government”.  Furthermore, he condemned those political forces allegedly working with enemies of Ethiopia. He called them “banda”, the label for Ethiopians who collaborated with Italian invaders after 1935.

On 3 May, Jawar Mohammed, now a senior Oromo Federalist Congress (OFC) figure, wrote: “the decision on the date of the national elections and the type of provisional administration we will have in the interim period between September and election time should only be made after proper dialogue and agreement with all political parties and concerned stakeholders including civil society organizations”.

A day later, federalist opposition parties, including OLF and OFC, said they were “seeking a legitimate political consensus on how to manage the constitutional crisis the country is facing”, through “the deliberation and negotiation (of the registered parties) facilitated by entities who do not have direct involvement in electoral affairs and do not have a vested interest in the outcome…The final agreement reached by the parties should be binding.”

Officials and constitutional specialists have been offering their views on how to overcome the crisis. Even when supporting the interpretation option, some, like Solomon Dersso, who sits on the African Commission on Human and People’s Rights, have articulated proposals on how to make the process more inclusive for political forces and civil society representatives.

The TPLF now positions itself as the champion of the constitution, even though constitutionally protected civil rights were frequently violated during its period of pre-eminence. It announced it wants to hold regional elections in Tigray independently from the rest of the country, which is legally debatable. Electoral board chair Birtukan Mideksa, a former opposition leader, despite having no mandate to speak on this issue, stated this was “unconstitutional”. The TPLF seems increasingly set on confronting Abiy, but its rigidity and refusal to make a sincere assessment of its controversial rule maintains its isolation from ethno-nationalist forces who would be its natural allies.

On 4 May the House of Peoples’ Representatives, the lower legislative house, announced it would hold a special session the following day. On 5 May, it voted in a similar hurry—the debate lasted less than two hours—to endorse interpretation.

The next day, Alemu Sime, Political and Civic Affairs Head of Prosperity Party, stated that regarding the interpretation option “any other alternatives being informally raised by some citizens is unconstitutional and unacceptable”. Thus, all dissenting voices, including even those who backed interpretation but suggested making it more inclusive, were rejected. Abiy confirmed this position in his 7 May address.

The primary conclusion to draw from this sequence of events is that it would have been hard for the incumbent to express a more reckless disregard for dissenting voices, regardless of how constructive they are, from opposition or civil society, and thus to have done more to derail the “democratic transition”.

True, the opposition is presently toothless. It cannot use its favourite tools, demonstrations, road blocks, etc, because it would then—justifiably—be accused of undermining the struggle against the pandemic. The whole political scene is frozen—except in the palace. The pandemic gives Abiy a strong ally: time. But he has further jeopardized a peaceful future by dismissing these actors. They may well have a strong motivation to return to the streets again when the health situation normalizes.

Tactically, Abiy could have tried, or at least looked as if he was trying, to find a compromise with the Oromo opposition so as to further isolate TPLF. But he apparently feels strong enough to rule without the support of any strong opposition constituency and also against the democratic push from civil society.

Ethiopia Insight — Yes, the pandemic does present a political opportunity—for Abiy
Rene Lefort: There are few reasons to think Ethiopia’s political classes can now redirect the transition in a more democratic direction.

Abiy’s camp has used a legal means—one could say legalistic—to try and sidestep a problem that is essentially political and thus could only be sustainably solved through a political process. Despite the prime minister’s claims, Prosperity Party controls all the involved institutions, including the House of Federation, the upper dispute-resolving chamber of parliament, and the autonomy of the Council of Constitutional Inquiry is questionable. Therefore, even if nobody knows for certain the outcome of the interpretation process, it is highly improbable that it will throw up a nasty surprise for Prosperity Party and its leader.

But before the interpretation has been concluded, despite declaring that the body in charge of it, the Council of Constitutional Inquiry, a kind of advisory version of a constitutional court, “is an independent collection of professionals”, even this legalistic window-dressing has been peeled away. Abiy said that “Prosperity Party is a political party that is responsible for everything including managing COVID-19 threat and continues to govern the country until the next election period”. To justify the legitimacy of the ruling party to do so, the prime minister asserted that Prosperity Party is one of the parties “favoured by the majority for winning the next election”.

This approach violates the separation of powers, one of the pillars of democracy. How could the prime minister executively announce that his government will remain in place until the next election period before the Council of Constitutional Inquiry has concluded its work and before the House of the Federation—part of the legislative branch—makes its decision on the Council’s recommendation?

In addition, after a strong warning that “the demand to get power through illegal ways or by trying to undertake illegal elections is unacceptable,” Abiy did not utter one word to extend his hand to the opposition.

I recently wrote “Abiy seems to have deprioritized the transition’s success in favour of becoming the next in a long line of Ethiopian ‘Big Man’ rulers”. This is confirmed by recent events. The ruling system the Nobel laureate yearns for becomes clearer and clearer.

28 Apr. 2020 Yes, the pandemic does present a political opportunity—for Abiy

25 Oct. 2019 Local bosses may fill the party-sized hole in Ethiopia’s next election